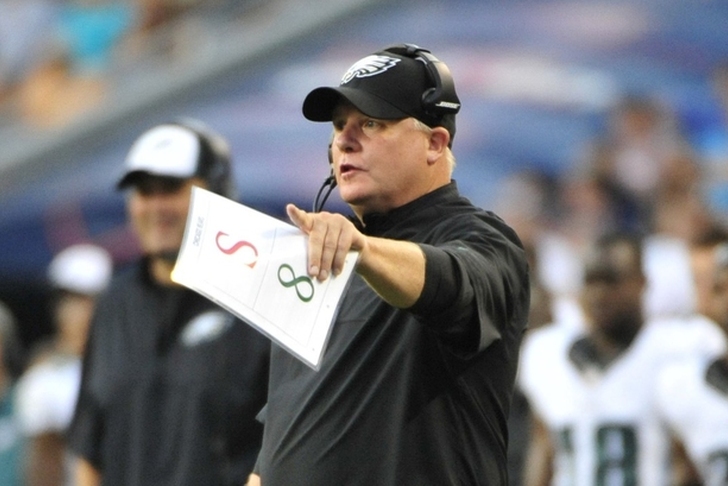 The blanket narrative surrounding the firing of head coach Chip Kelly by the Philadelphia Eagles on Tuesday is that the team decided that Kelly's power-hungry ways were hurting the team from both an on-the-field and administrative standpoint.

However, Jason Cole of Bleacher Report reports that Kelly wasn't afraid to "force his way" out of Philadelphia with two years left to go on his five-year deal -- the reason being that Kelly is in the market for a team where he can groom a quarterback that fits best into his offensive scheme.

Per sources cited by Cole, Kelly's #1 choice for his next job is a reunion with former Oregon Ducks quarterback Marcus Mariota in Tennessee. Kelly is very interested in the job, and you'd have to believe that the Tennessee Titans will reciprocate at least to the extent of vetting him as a replacement for fired coach Ken Whisenhunt.

Kelly also has a list of teams that he has interest in that he believes will have interest him as well. One of those is the Cleveland Browns who tried to hire Kelly three years ago before he ultimately decided to head to Philadelphia. Head coach Mike Pettine will reportedly be retained while GM Ray Farmer is set to be fired, but things could change if Kelly exhibits legitimate interest down the road.

Another is the Miami Dolphins who are looking for a marquee name to revitalize the franchise in the wake of the Joe Philbin firing. Interim coach Dan Campbell has his supporters, but the team's fade from the playoff pack this year is enough to assume that they'll be casting a wide net in their coaching search.

One other destination that has been tossed around in rumors the past 24 hours is the San Francisco 49ers. Who knows what lies ahead for head coach Jim Tomsula, but the allure of pairing Kelly with a mobile quarterback like Colin Kaepernick is something to take note of when it comes to a 49ers front office in flux. This is in the realm of speculation right now, as Kelly hasn't registered interest in the job (yet) according to sources close to him.

In short, Kelly believes he has plenty of options to work with and wasn't afraid to sever ties with the Eagles or have them sever ties with him. Eagles owner Jeffrey Lurie told reporters on Tuesday that the Kelly's release was a "clear and important decision that had to be made." That may be so, but it's also a decision that could prove beneficial for both sides before the smoke clears after this upcoming offsesason.