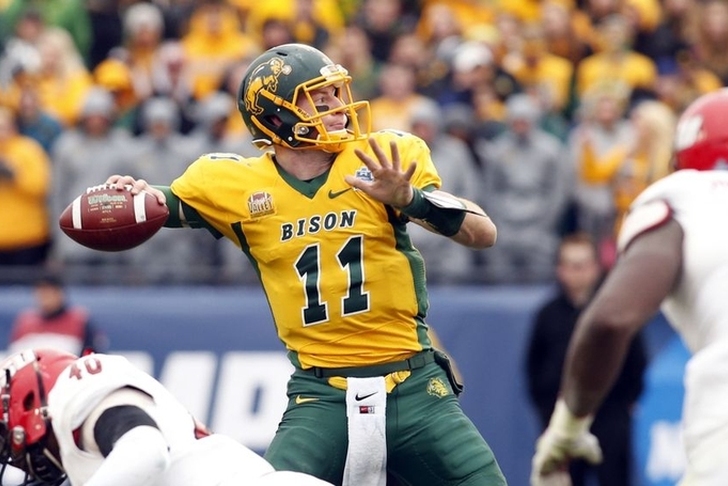 The Tennessee Titans have the No. 1 overall pick in the 2016 NFL Draft, and are open to trading down. New general manager Jon Robinson basically put the No. 1 pick on the block during his introductory press conference.

"I can’t say with certainty that we are going to move the pick or that we’re not going to move the pick,” Robinson said. "But I think we’ll look at any and all offers that come this way and make a decision that’s best for the football team. If that means sticking and picking, we’ll stick and pick. If that means moving around and working the draft with trades, then that’s what we’ll do."

It makes sense that the Titans would want to trade down. The roster is full of holes and trading down would allow the team to acquire more draft picks. The Titans don't have a need for a QB with Marcus Mariota on the roster and they could trade the pick to a team that wants Carson Wentz or Jared Goff. The Titans are open to moving down, but making a deal is not going to be easy. After all, there hasn't been a trade for the No. 1 overall pick since 2004. With that in mind, here are three teams that could make a trade for the No. 1 overall pick, and what it would cost.

3. Los Angeles Rams
This would be a true blockbuster deal. The Rams need a QB, as Nick Foles was a disaster this season and Case Keenum isn't a long-term option. The Rams have the No. 15 overall pick, which means it's unlikely that they'll be able to get Goff or Wentz. Lynch might be on the board, but the Rams might not be sold on him. If the Rams fall in love with Wentz, they'd likely have to trade up in front of the Browns to do so.

What It Would Cost:
A move up by the Rams would be extremely expensive. The team would likely have to give up their first rounder this year and next year, plus both second round picks this season. And that still might not be enough for the Titans. It's likely too expensive for the Rams to move up.

2. Baltimore Ravens
Unlike the other two teams on this list, the Ravens aren't going after a QB. The Ravens could try to move up with the Titans to take a defensive player, likely FSU DB Jalen Ramsey. He fills a major need and might be the best defensive player in the NFL Draft. He's not likely to fall to the Ravens' No. 6 overall pick, as the four teams in front of them could take Ramsey.

What It Would Cost:
The Ravens would need to give up their second and third round picks at least to move up, according to the Trade Value Chart. While the Titans would pull the trigger on that deal, it's likely too much for the Ravens to give up. For more NFL Draft coverage, download the Chat Sports Android and iPhone app.

1. Cleveland Browns
The Browns have the No. 2 overall pick and seem destined to take a QB. But if a team like the Rams (or even 49ers) start to try to move up, the Browns might make a deal with the Titans to ensure Cleveland gets its man. The team did something similar with the Minnesota Vikings to get Trent Richardson, although that didn't turn out very well.

What It Would Cost:
The trade value chart says the difference between the No. 1 and No. 2 pick is worth a mid-second rounder. But the Titans would pull the trigger on a deal in exchange for a third and would probably do it if the Browns just sent over an early Day 3 pick. But because there aren't many teams that appear interested in a moving up, the Browns shouldn't feel forced to make a deal.