Game-By-Game Prediction Of The Tennessee Titans' Record In 2017 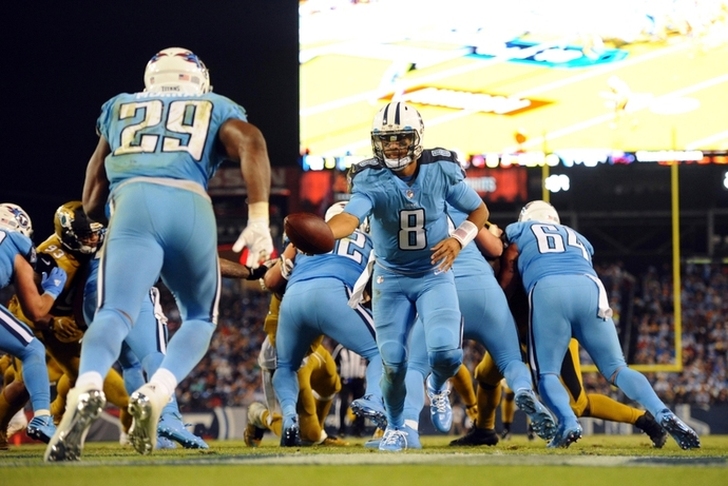 The Tennessee Titans nearly made the playoffs last year after a breakout season, and with all of their key pieces returning, they are expecting to be in the postseason rather than hoping. Will they be able to make it there? Here's a game-by-game prediction of Tennessee's schedule this year:

The Jags have some good young talent, but until they find a quarterback who is not named Blake Bortles, they will struggle.

This may be a bit of a surprise, but given the way Seattle has struggled on the road - and Tennessee's vastly improved play - I think the Titans get a signature win early in the season.

Houston has won the AFC South each of the last two seasons despite having terrible quarterback play, doing so with a dominant defense and good skill players. Dealing with J.J. Watt and Jadeveon Clowney will be a problem for Tennessee's offense. These two teams are the favorites to win the AFC South, so I expect them to split their matchups this season. Titans lose on the road.

Thanks to Adam Gase and the improvement of Ryan Tannehill, the Dolphins are a team on the rise in the AFC after making the playoffs last year. This will be a great early-season measuring stick game against another playoff-caliber team - one that will be a close loss.

Andrew Luck's healthy is a major question mark coming into the season and the Colts still lack talent at every other position (with the exception of wide receiver). They're closer to taking another step back than taking a step forward.

The Browns went 1-15 last year and might not be all that better in 2017. They're building in the right direction, but it will take time for Cleveland to start winning games again. That won't be the case by Week 7 this year, so even though it's on the road, this should be a win for the Titans.

Baltimore has a team full of good players, but there isn't thing that they do exceptionally well. They will push for a playoff spot this year and eek out a narrow home win thanks to their defense.

The Bengals have plenty of talent, but they aren't the most disciplined squad and struggle along both the offensive and defensive fronts. I would expect Tennessee to win by at least a touchdown.

Tennessee is a quality team that expects to make the playoffs in the AFC this year. However, since this game is in Pittsburgh on a Thursday night, the Steelers get the nod.

Even though this game is on the road, it's one the Titans will win. Indianapolis has no answer for Tennessee's rushing attack and could be close to self-imploding by this time if they struggle early in the season.

There isn't a lot of talk about here. The Jets are one of the least talented teams in the entire league and until they find an answer at quarterback - which won't happen this year - they are going to struggle mightily.

Arizona will bounce back after a disappointing 2016 season. They still have top-level talent all over the field, and though they have question marks in their defensive front seven, their offense will put up a boatload of points at home.

It's not like the 49ers are any good right now. San Francisco is entering a rebuilding stage and by this point in the year, they could be not-so-secretly tanking for the No. 1 draft pick. So even on the road, this should be an easy win for the Titans, especially if they're pushing for a playoff spot.

The Rams were awful last year, going 4-12 as QB Jared Goff looked totally lost. Sean McVay is a promising young coach and Wade Phillips is still a great defensive coordinator. But unless Goff takes a massive leap forward, the Rams aren't going to be very good next year. Expect the Titans to win this one easily.

The Jags will likely be better, but this is still a game the Titans should win. Plus, the Titans could be fighting for a playoff spot in Week 17.