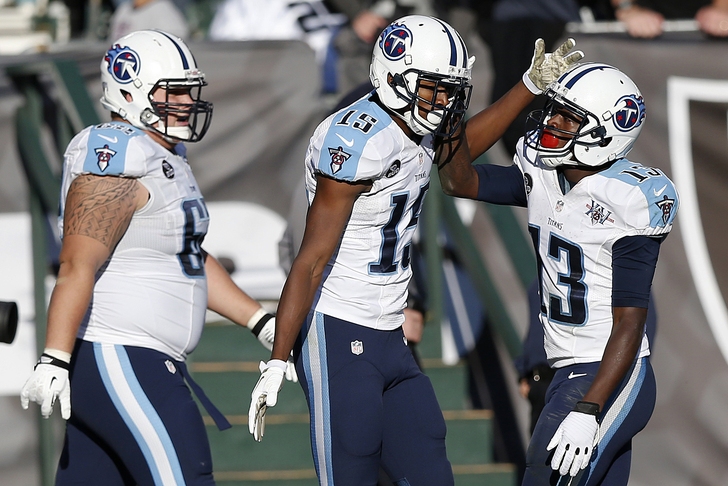 The Tennessee Titans started the season with three wins in their first four games. They then went on to lose eight of their next twelve games, due to injuries to key players, highly inconsistent play from Chris Johnson and a complete disappearing trick from wide-receiver Kenny Britt. Finishing the season at 7-9 and missing the playoffs for the fifth consecutive season the Titans need to have a very successful draft. Titans defense finished twenty-second in overall team offense and score 22.6 points per game. On the other side of the ball they finished fourteenth overall scoring 23.8 points per game. With the No. 11 overall pick the Titans are guaranteed one of the top talents in this years class, the question is, what position do they decide to take in the first round?

1) Pass Rushing DE/OLB: The Titans finished with only thirty-six sacks on the season, good enough for twenty-first and only five more than the last place team. With a new head coach and defensive coordinator coming to town they need to get the kind of players that can rush from the edge and either get the sack or force pressure on the quarterback. No defensive end or outside linebacker had more than six sacks for the Titans last season and in their new attacking 3-4 defense, that can't happen again.

The Titans are losing their top two defensive secondary players to free-agency as Bernard Pollard and Alterraun Verner will be too costly for the Titans to bring back. They will probably offer a contract to one of them but if they hit the free-agency waters, there will

be plenty of other lucrative offers on the table. Pollard is a proven veteran safety who solidifies the back end of a defensive secondary, any team looking for a safety and is in a win now mode could put all their chips in on him for a couple seasons. Verner is coming off a five interception season and a definite up and coming shutdown corner. Only twenty-five years of age and going into his fifth season, he is a prime candidate to get one of the larger contracts this off-season.

Right tackle David Stewart has more than likely played his last snap as a Tennessee Titan and will head to free-agency going into his tenth season in the NFL. His asking price will just be a bit too high for the Titans to pursue him. This years draft class has a good set of offensive lineman and a mid-round pick on a talented lineman could prove valuable in the future for Tennessee.

With the Titans front office and many of the fans ready to move on from Chris Johnson (CJ?K) they will need to find a running back to pair with Shonn Greene, another underachieving back. The Titans could go one of two ways and spend a picsk in round two or three on one of the top backs or wait until the later rounds to bring in a guy to be a change-of-pace type back. Guys like Bishop Sankey or Ka'Deem Carey could be good fits.

Anthony Barr, DE/OLB UCLA: A very talented pass rusher who is a converted linebacker after switching over from the running back position two years ago. Barr is a good fit for the new 3-4 attacking defense that the Titans are going to employ this season. He has long been the number one rated outside linebacker in this class, even with a bit of a slide he still has a chance to prove his worth at the number 11 pick.

Dee Ford, DE Auburn: Ford had a huge senior bowl and has been steadily climbing up the NFL Draft boards. Each year there seems to be one or two players who really rise above their original draft projection and this year's looks to be Ford. Pass rushing is a need for the Titans and both Ford and Barr could provide that.

Darqueze Dennard, CB, Michigan State: If the Titans choose to go another route than pass rusher in the first round then they should elect to go with the top defensive back in this class. That title goes to Dennard, a steady coverage cornerback. According to cbssports.com Dennard is the No. 1 cornerback and the No. 11 player overall. After watching Dennard play in the Sugar Bowl against Stanford, I posted a few notes on him here.

Jason Verrett, CB, TCU: Standing at only 5' 9" Verrett has shown that he can be a shutdown corner. Facing off against taller receivers he was able to use his fluid hips and hand-checking to counter his height difference. Verrett held LSU's Odell Beckham Jr. without a reception and other top receivers to their worst games of the season.

Joel Bitonio, OL, Nevada: Bitonio started 36 consecutive games for Nevada at the left tackle position but has shown the ability to move through the different positions on the offensive line. Projected to be drafted in the third or fourth round the Titans will hope to see him slip to the fourth as they don't have a third round pick. Bitonio can prove to be a good replacement for departing right tackle David Stewart, if not immediately than definitely down the road.

Bishop Sankey, RB, Washington/James White, RB, Wisconsin: Whether or not people think they should look to add a running back in this draft I believe they should. If they decide to use one of their early picks on a RB, Sankey is guy to draft. If they choose to wait it out for a RB then either White or Tyler Gaffney can prove to be solid choices.