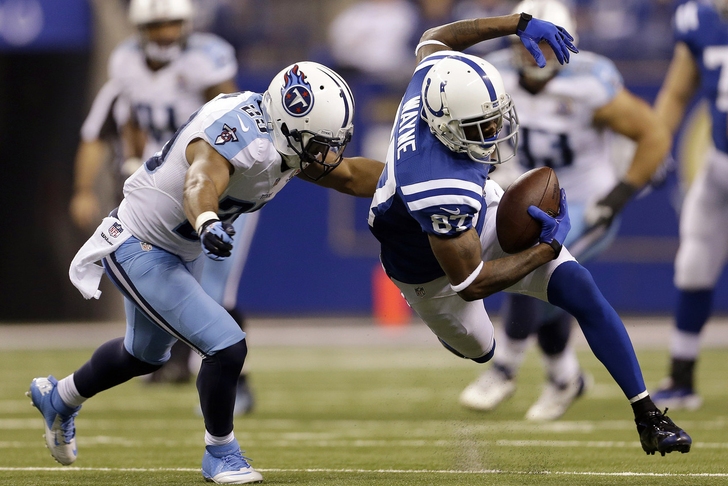 The Titans struggled to get anything going with backup Charlie Whitehurst under center, though a late interception set them up for a score to keep it close at 20-10 at the half.

Andrew Luck and the Colts offense was too much for the Titans to keep up with, pouring it on in the second half for a blowout victory.

Reggie Wayne hauled in a touchdown to go along with 119 yards on seven receptions.

TY Hilton also finished with over 100 yards receiving, doing so on six catches.

Bishop Sankey saw work when the game got out of hand, rushing for his first career touchdown and racking up 34 rushing yards and 23 receiving yards.

Despite being questionable all week with a shoulder injury, Delanie Walker led the Titans in receiving with 84 yards and a touchdown.

Turning Point: The Colts led at halftime and it stayed that way, so there was never a turning point.

Luck found Reggie Wayne for a touchdown reception midway through the third quarter to extend the lead to 27-10, icing the game at that point.

1) Jake Locker may be in danger of losing his starting job, but it doesn't mean Charlie Whitehurst is the answer.

He did what was expected of a backup, making a couple nice throws but ultimately struggling to get anything going.

Zach Mettenberger made his debut, though that may have had more to do with the score than anything else.

2) Bishop Sankey needs to be more involved. With the running game doing next to nothing yet again, the rookie's time could be drawing near.

He received some touches in garbage time for the second week in a row, but look for him to get more meaningful looks moving forward.

The Titans host Cleveland, while Indianapolis plays host to Baltimore