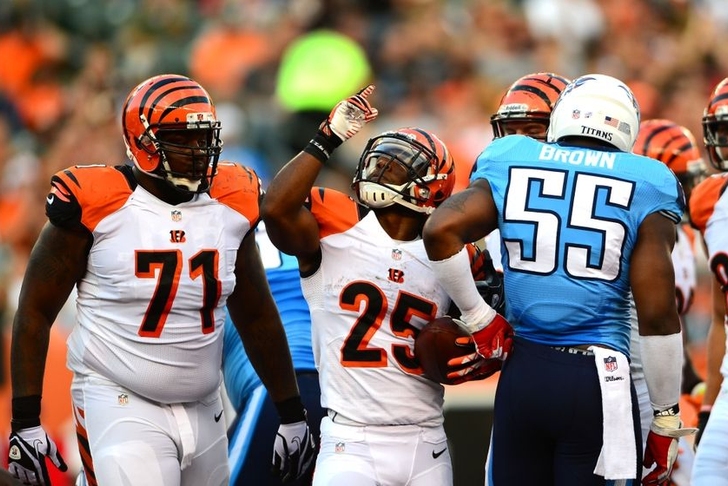 The Bengals capitalized on some Titan mistakes to jump out to a 19-0 lead heading into the half.

Not much changed in the second half, as the Bengals defense swarmed Jake Locker and the Titans, holding them to just seven points.

Jake Locker crumbled for a second week in a row, finishing 17/34 for 185 yards and two turnovers.

Rookie running back Bishop Sankey saw the most extensive work of his young career, touching the ball 10 times for 61 yards.

Andy Dalton did enough in a game where he wasn't forced to do much to win. Aside from his touchdown reception, he completed 15/23 for 169 yards.

Gio Bernard punched in two touchdowns and helped run the clock in the second half, finishing with 47 yards on 14 carries

Jeremy Hill added his second career touchdown run in garbage time, punching it in from four yards out.

The Bengals defense was tough, although the Titans ended up outgaining Cincinnati after they packed it in in the second half.

Turning Point: With the Titans offense unable to get anything going offensively, the 19 point half time deficit put this game out of reach before Tennessee could even establish a threat.

1) After a strong opening win against Kansas City, the Titans have looked flat on both sides of the ball the last two weeks.

Jake Locker needs to get things figured out soon, or the Titans may have a quarterback controversy on their hands.

2) A.J. Green looks healthy after turf toe had his status questionable throughout the week. He looks to have come out of this game healthy, and will remain Dalton's go-to receiver moving forward.

3) Cincinnati looks like a factor in the AFC North, and with Pittsburgh, Baltimore and Cleveland beating each other up early, the Bengals are out to an early first place start.

Cincinnati has a week 4 bye before heading to New England, while the Titans head to Indianapolis.