The 5 Easiest Games On The Titans' 2017 Schedule 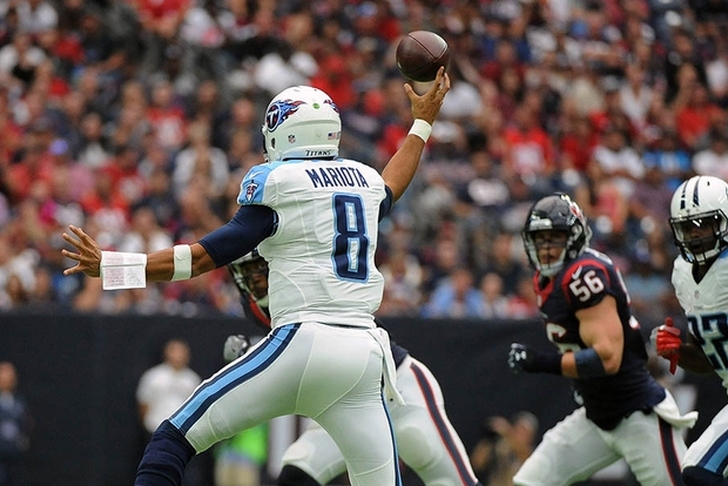 The 2017 NFL schedule is out and the Tennessee Titans have a tricky road ahead of them in their quest to make the NFL Playoffs next season. The team knows which games will be the toughest, but which ones set up as games the Titans will feel confident in winning? "Easiest" is always a relative term in the parity-driven NFL, but here are the five easiest games on the Titans' 2017 schedule.

5. vs. Houston Texans (Week 13)
Just hear me out on this one. The rest of the schedule outside the bottom four games is not easy and it was tough to figure out which game to pick. I was torn between the Texans, Colts and Bengals, so I went with the team that had the worst point differential last year. That's right: the Texans actually allowed more points than they scored in 2016. Add in that the team lost more than they added and has major QB questions, this could be a viewed as an easy win by Week 13. The Texans are set to start Tom Savage's zero career passing TDs or rookie Deshaun Watson this year and that's not a recipe for success.

4. vs. Jacksonville Jaguars (Week 17)
The Jags actually could be a decent team this year. There's a budding young defense and plenty of promising players on offense. There's also Blake Bortles at QB and last year's 3-13 record hanging over their heads. The Jags will likely be better, but this is still a game the Titans should win. Plus, the Titans could be fighting for a playoff spot in Week 17.

3. at Cleveland Browns (Week 7)
Frankly, take your pick for easiest game of the final three. The Browns went 1-15 last year and might not be all that better in 2017. They're building in the right direction, but it will take time for Cleveland to start winning games again. That won't be the case by Week 7 this year, so even though it's on the road, this should be a win for the Titans.

2. vs. Los Angeles Rams (Week 16)
So, the Titans have quite the easy end of season stretch, huh? The Rams were awful last year, going 4-12 as QB Jared Goff looked totally lost. Sean McVay is a promising young coach and Wade Phillips is still a great defensive coordinator. But unless Goff takes a massive leap forward, the Rams aren't going to be very good next year. Expect the Titans to win this one easily.

1. at San Francisco 49ers (Week 15)
Another road game, but it's not like the 49ers are any good right now. San Francisco is entering a rebuilding stage and by this point in the year, they could be not-so-secretly tanking for the No. 1 draft pick. So even on the road, this should be an easy win for the Titans, especially if they're pushing for a playoff spot.

Check out our Tennessee Titans team page for all the latest Titans news or download the Chat Sports App!