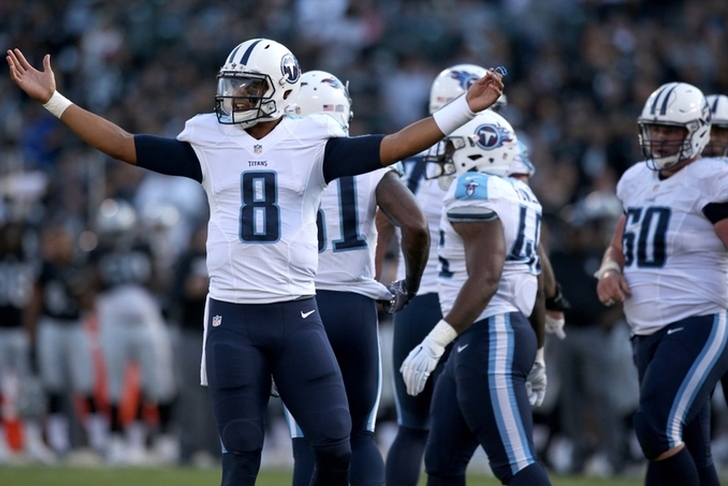 The Tennessee Titans nearly made the playoffs last year after a breakout season, and with all of their key pieces returning, they are expecting to be in the postseason rather than hoping. However, we think they'll do even better than that - we think they're going to win the AFC South for the first time since 2008. Here are three reasons why:

1) Improved passing game
Marcus Mariota continued to improve in his second year in the league, passing for 3,426 yards and 26 touchdowns with just nine interceptions, and that improvement should only continue in 2017. The third year is usually when young quarterbacks break out as they get a better understanding of NFL defenses, and Mariota certainly seems on track for a breakout year.

Plus, Tennessee has given him more weapons to throw to. Corey Davis will step right in as the big-body starting receiver the Titans desperately lacked, allowing them to move Tajae Sharpe back to the slot.

2) Reliable rushing attack
That improved passing game is only going to make Tennessee's dominant rushing attack even more effective. DeMarco Murray managed 1,287 yards and nine touchdowns on 293 carries last season despite opposing defenses usually putting eight men in the box, which won't happen when Mariota starts making defenses pay for that. Throw in another year of Derrick Henry after a full offseason in Tennessee's program and you have the most dominant rushing duo in the league - and that's not even counting what Mariota can do with his legs.

3) Who's going to stop them?
Simply put, the AFC South is not a strong division. The Jaguars have talent in some areas, but are horrid with others and won't go anywhere with Blake Bortles as their quarterback. Houston, the two-time defending division champs, have a dominant defense but also have a MAJOR question mark under center. Then, of course, there are the Colts, who won't be a real threat for another year or two as they round out their roster. Tennessee appears to be the most well-rounded team in the division, which usually leads to success.