3 Players The Tennessee Titans Are Likely To Draft In The 1st Round Are... 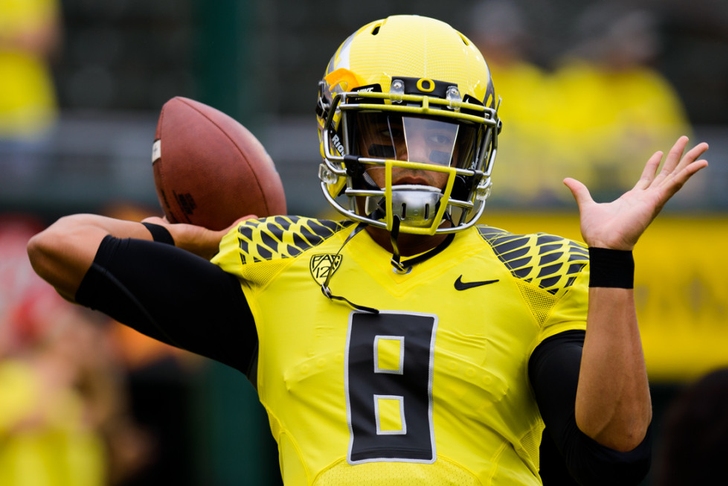 The Tennessee Titans have plenty of needs heading into the 2015 NFL Draft, but they’ll only be able to address a few when draft day rolls around in late April. Here are the three players they're looking at with the No. 2 overall pick:

Charlie Whitehurst and Zach Mettenberger have been far from convincing. This team won’t be able to contend without a player who can rally both the players and the franchise as a whole, and Mariota can be that player. His leadership skills have improved dramatically over the last season, and he can come in and command respect from day one.

Coaches, scouts and NFL executives generally bring up the same name when talking about Mariota’s closest NFL comparison…another Pac-12 product named Aaron Rodgers. While Mariota uses his feet a bit more often than Rodgers at the college level, he has the size, mobility and precision to emulate the former Cal star in the big leagues. This isn’t to say he’ll automatically be as good as Rodgers – far from it – but that comparison certainly can’t be a bad thing.

All things considered, the Titans actually have some decent pieces on offense. While they could certainly upgrade the backfield, guys like Bishop Sankey, Delanie Walker, Kendall Wright and Nate Washington all need a player who can bring out their best. Mariota can do that.

The Titans need someone who can help shut down the run, and their 2014 season statistics make it pretty clear why.Tennessee gave up 2,195 rushing yards last season, ranking them 31st out of all 32 NFL teams. That works out to 137.2 yards per game, and anyone who watched the Titans much can remember dozens of times when the team looked utterly incapable of stopping the run (Pittsburgh’s Le’Veon Bell comes to mind).

Williams is undoubtedly the best defensive player in this draft, and may be the Titans' best option if they don't draft a quarterback.

Winston is expected to be drafted by Tampa Bay with the top overall pick, but if they somehow pass on him, Tennessee will scoop him up quickly. He's a better bet to succeed in the NFL than Mariota, and the Titans need someone who can get them back on the map.