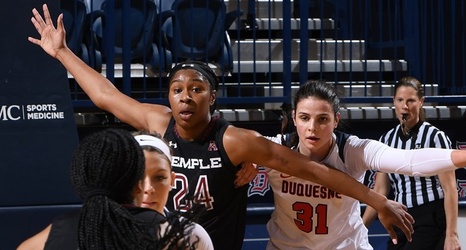 PITTSBURGH — A tight game came down to the final possession, but in the end, Duquesne won the Pennsylvania city battle, as the Dukes outlasted the Temple women's basketball team, 54-53. The loss dips the Owls to 4-8 overall, while Duquesne improves to 6-7.

Keys to the Game
> A tie game heading in the fourth quarter saw the Owls go up one on on two separate occasions, but trailing 54-53 with under seven seconds to play, Temple couldn't get the game winner to fall.
> The Owls finished with a shooting advantage, 34.