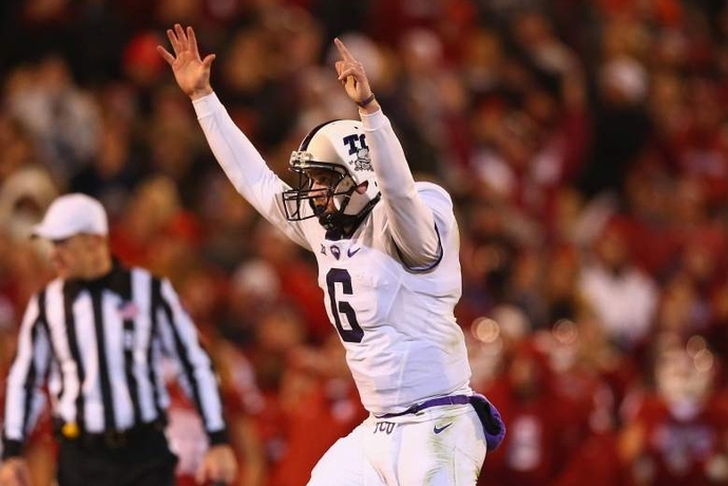 The 9-4 Oregon Ducks jumped out to a 31-0 lead at halftime of the Alamo Bowl and it seemed like the Ducks were on pace for an easy win. However, QB Vernon Adams left the game late in the second quarter with a head injury. With Adams out, the 10-3 TCU Horned Frogs came roaring back in the second half with 38 unanswered points to force overtime. The Horned Frogs continued their great second half play and won 47-41 in OT to cap a thrilling bowl game.

The Horned Frogs had the ball to start overtime and scored on a touchdown pass from Bram Kohlhausen. The score gave TCU its first lead of the game. Oregon responded with a TD drive of its own, which included a fourth down conversion. The Ducks were forced to settle for a field goal in the second OT. TCU's field goal attempt from 46 yards forced a third overtime. TCU found the end zone in the third OT on a run by Kohlhausen. The Horned Frogs failed to convert the two-point conversion. It didn't matter, as TCU prevented Oregon from finding the end zone.

The 31-point comeback matches the biggest in bowl history and the largest comeback in any game this season.

With star QB Trevone Boykin suspended, Kohlhausen got the start. The senior led a furious comeback, battling through injuries that caused him to miss a few plays. He completed 30 of 47 passes for 351 yards, two TDs and a pick. He also added 45 yards and two scores on the ground.

Adams completed 13 of 19 passes for 197 yards and a TD. He didn't do much on the ground, but the Ducks' offense wasn't anywhere near as effective without Adams. Jeff Lockie completed just seven of 15 passes for 36 yards.

The Oregon defense also struggled in the second half. They spent much of the half on the field and looked gassed and exhausted. TCU outgained Oregon 545 to 419. Of Oregon's yards, 345 came in the first half.