TCU vs. Baylor: 3 Things We Learned 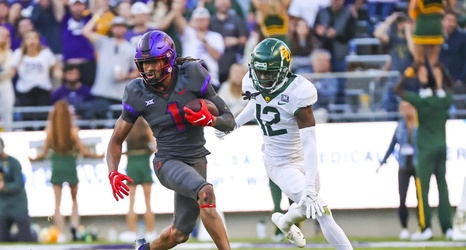 TCU came out with a burst of newfound energy Saturday, upsetting the Baylor Bears 30-28 behind a spectacular offensive performance from redshirt freshman quarterback Chandler Morris and a victory-sealing interception from four-star freshman linebacker Shadrach Banks. With three Big 12 matchups remaining, TCU remains in the hunt for a bowl game, but the team will have to knock off another ranked opponent in Oklahoma State this weekend.

Here are three things we learned from TCU’s upset victory over Baylor.

TCU QB Chandler Morris on the upset of No. 14 Baylor: “Everything we’ve been through this week, obviously with Coach P, we were fighting for him.