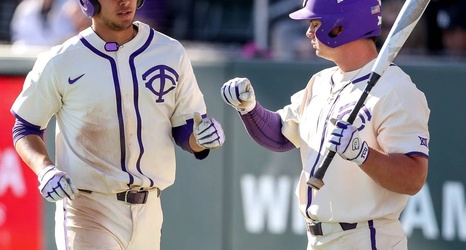 Adam Oviedo found his groove early and finished with three hits and two RBIs to lift TCU to a 6-2 victory over No. 19 Oklahoma in Game 2 of a doubleheader Sunday at Lupton Stadium as the Horned Frogs salvaged one game of the three-game Big 12 baseball series.

TCU (15-13, 4-5 Big 12) scored three two-out runs in the third as Josh Watson's hit sparked the rally. Watson moved to third on Michael Landestoy's single and scored on an A.J. Balta double. Oviedo gave the Frogs the lead with a two-run single to right.

Charles King got the start for the Horned Frogs and pitched four innings, allowing a run on three hits.