TCU Baseball addresses the media prior to regional matchup 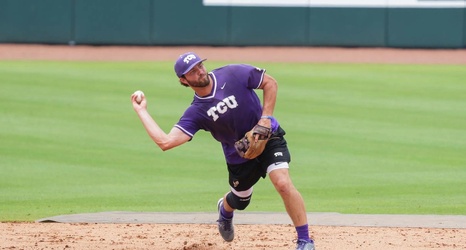 TCU Baseball Head Coach Kirk Saarloos along with key players Tommy Sacco and Riley Cornelio sat down to speak with media ahead of Friday night’s regional matchup against the 3-seeded Louisiana Ragin’ Cajuns.

Throughout the press conference, there was a sense of confidence across the trio of Horned Frogs. Although a “been there, done that” attitude could be expected for a team that’s made the postseason 16 times in the last 18 years, the Frogs appeared to be cool, calm, and collected while also maintaining a level of respect for their fellow regional qualifiers.

Despite being matched up with Louisiana for game 1, it seems like the whole world is getting googly-eyed over the potential Schlossnagle vs Saarloos matchup before it’s even been confirmed.