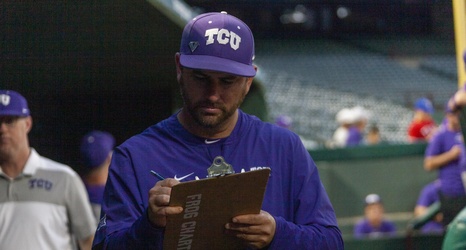 TCU Baseball fans are breathing a sigh of relief Tuesday, as TCU pitching coach and recruiting coordinator Kirk Saarloos has been selected to take over as skipper of the program, replacing Jim Schlossnagle who departed for Texas A&M earlier this month. The announcement was made in front of media members who gathered in the Four Sevens Team Room Tuesday afternoon at the behest of TCU Communications and was also streamed on www.GoFrogs.com for fans.