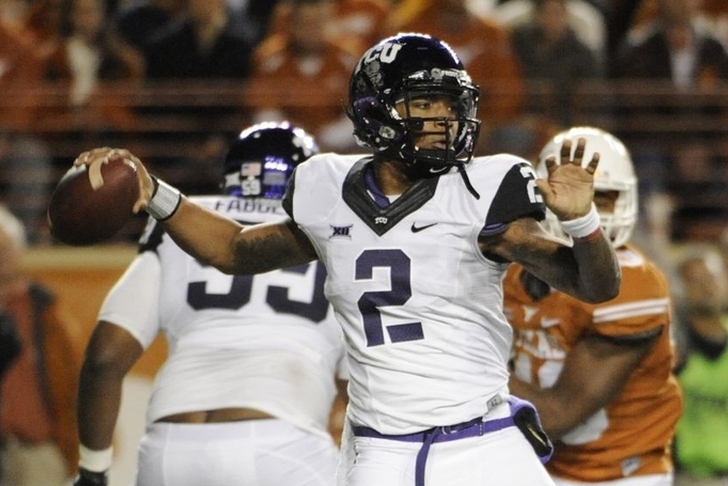 The TCU Horned Frogs flexed their muscle for the first time this year, absolutely destroying Texas on their way to a 50-7 victory over the Longhorns. Here are three things we learned from the game:

Charlie Strong is firmly on the hot seat

The seat of Charlie Strong is on fire and growing hotter with each game. The Texas Longhorns are 1-6 in their last seven games, and each one has been embarrassing. Games against Notre Dame, Arkansas, and TCU (twice) feature an offense that resembled a dumpster fire. Losses to California and Oklahoma State featured awful defensive efforts (which was supposed to be Strong's strength), along with plenty of physical and mental mistakes.

None of those mistakes was more unacceptable than Strong's 15-yard unsportsmanlike penalty for arguing a questionable defensive holding call late in their loss to the Cowboys. The flag put Oklahoma State in field goal position with under two minutes to play. The Cowboys won the game after a fumbled punt on Texas' last possession led to field goal. That special teams miscue came a week after Texas shanked an extra point late in the fourth quarter that would have tied the game.

It's tough to blame the special teams mistakes on Strong, but penalties are often directly attributable to coaching. Texas committed 16 penalties for 128 yards against Oklahoma State - more yards than the Longhorns had passing.

Strong has the worst winning percentage in the history of Texas football, and the heat will always be on you when that's the case and your team isn't showing any improvement.

TCU started the season ranked second in the country, but fell to No. 3, then in a tie for No. 3, then dropped to their current No. 4 ranking in consecutive weeks thanks to unimpressive victories against Stephen F. Austin, SMU, and Texas Tech. Many were starting to think that the Horned Frogs were overrated, but this blowout victory over Texas should change their image.

Sure, Texas is struggling, but the Longhorns nearly knocked off an undefeated Cal team and a ranked Oklahoma State squad in the two weeks leading up to this game, adding to the impressiveness of this win for TCU.

Texas is NOT a good road team

The Longhorns are 0-2 on the road this season, losing by a combined score of 83-10 against TCU and Notre Dame. Their three performances at home have been respectable with a win over Rice and those two close losses, but they've been a complete disaster away from home.