3 Reasons Why TCU Is GUARANTEED To Beat Texas Tech 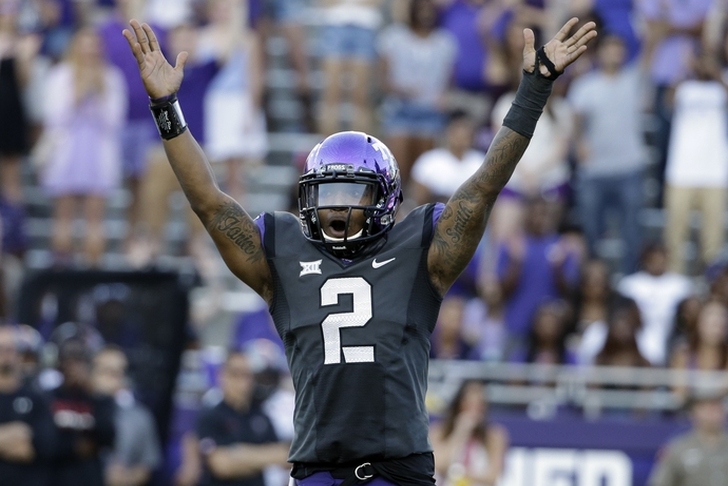 The TCU Horned Frogs are No. 3 in the nation and face their toughest test yet in the Texas Tech Red Raiders. Texas Tech has a great offense and is coming off an impressive win over Arkansas. Still, TCU is the better team and that will be clear on Saturday. Here are three reasons why TCU is guaranteed to beat Texas Tech.

Texas Tech's defense gave up 45 points to Sam Houston State and now they have to contend with a loaded TCU offense. Trevone Boykin is the focal point (more on him later), but TCU has weapons galore. Four different players have scored on the ground and Aaron Green is averaging six yards per carry. Seven different players have caught TD passes and ten are averaging double-digit yards per catch. TCU is loaded with players that can score in a hurry.

TCU is down several defensive starters, but they have the depth to overcome that this week. TCU is simply deeper than Texas Tech across the board and that will important. Texas Tech will be able to score, but TCU has enough talent to replace the lost starters and pick up a win.

Boykin is the best player on either team in this contest and he'll guide TCU to a win. He's had some issues with picks this season, but he's still recorded over a 1,000 total yards and 12 TDs. If TCU runs into defensive trouble, Boykin has the ability to carry the offense to a win. He might not need to do that, but with Boykin at the helm, TCU won't be upset by Texas Tech.

Follow our TCU Horned Frogs page for all the latest TCU news and rumors!