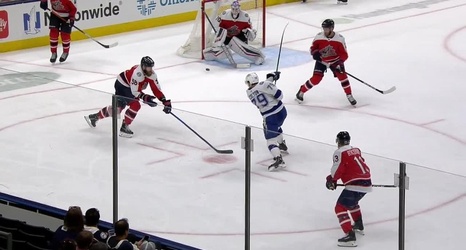 The good news is that the Tampa Bay Lightning played much, much better on Tuesday than they did on Sunday. The bad news is that they still lost. Despite a solid 38-shot effort the offense was once again left wanting in a 4-2 loss to the Columbus Blue Jackets. Zac Dalpe, Jack Roslovic, Max Domi, and Nick Foligno scored for Columbus while Joonas Korpisalo made 34 saves. Andrei Vasilevskiy stopped 27 shots in the loss. Ross Colton and Luke Schenn scored third-period goals for the Bolts.

The Lightning probably should have walked away from the first period with at least one goal.