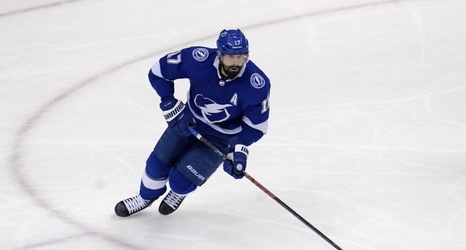 Aug 25, 2020; Toronto, Ontario, CAN; Tampa Bay Lightning center Alex Killorn (17) skates with the puck during the second period in game two of the second round of the 2020 Stanley Cup Playoffs against the Boston Bruins at Scotiabank Arena. Mandatory Credit: John E. Sokolowski-USA TODAY Sports

The Tampa Bay Lightning got through the NHL Draft and have yet to deal any of their big names rumored to be on the move.

Tyler Johnson has given the Bolts a list of teams that he’s willing to help facilitate a deal to while Alex Killorn has his trade clause shifted from a no trade to a modified trade – meaning there is a list of teams he doesn’t have to approve a deal to and the Lightning are free to engage in talks with.