You can now own a Tom Brady Buccaneers bobblehead 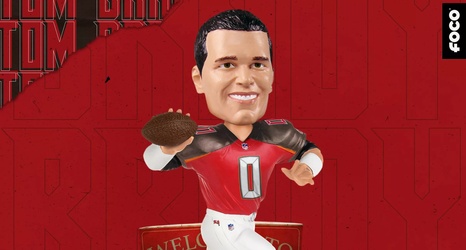 When was the last time the Buccaneers received this much attention? Their Super Bowl run? Regardless of when you feel that may have been, some pretty cool merchandise is being made with them represented nicely.

I mean, some guy named Tom Brady has something to do with that.

Ever since Tampa Bay signed the future Hall of Fame quarterback, all eyes have been on the Bucs and FOCO is yet another manufacturer that has created some memorabilia for Buccaneers fans to collect.

This Tom Brady Tampa Bay Buccaneers Welcome Series Bobblehead depicts Brady in an action pose in front of a backdrop with team accents welcoming him to his new city.