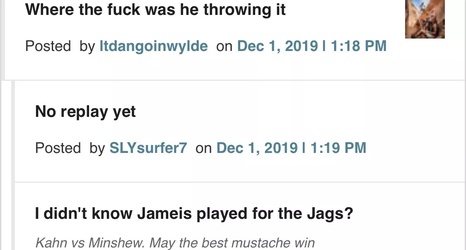 The Tampa Bay Buccaneers defeated the Jacksonville Jaguars by a final score of 28-11, and improved to 5-7 on the season while their hosts fell to 4-8.

Across SB Nation, team focused sites create open threads for fans watching the games live, on television or through other means, to interact and comment on what their favorite team is doing on the field of play.

As fans of a failing franchise with a lot of money dedicated to a now benched Nick Foles, you could imagine a lot of comments were not so friendly.