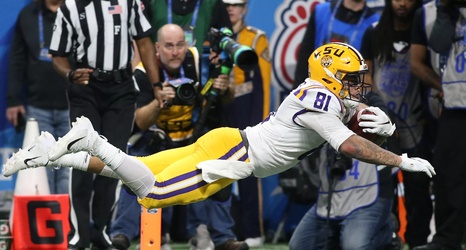 Considering he was a pretty significant part of LSU’s undefeated run to the College Football Playoff National Championship last season (plus the small fact that he’s the son of Pro Football Hall of Famer Randy Moss), Thaddeus Moss is one of the bigger names available at the tight end position in this year’s NFL Draft. Despite being pretty stacked at the tight end position, could the Buccaneers look toward the future now?

Prior to 2019, Moss didn’t have much to show for his college football career. He started it at North Carolina State in 2016, catching six passes for 49 yards and a touchdown.