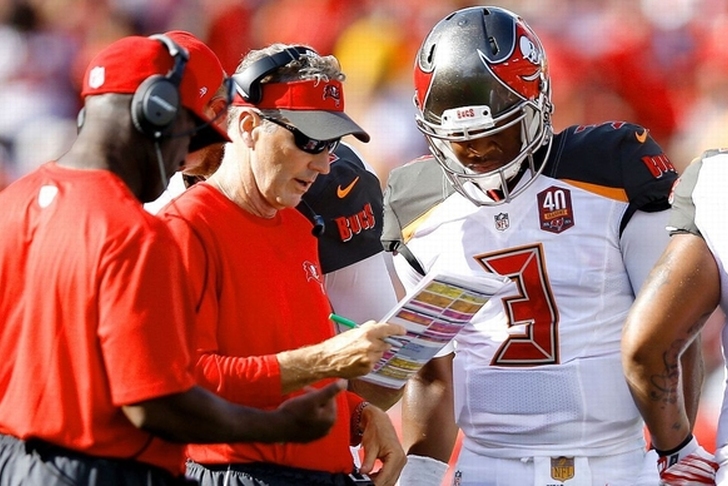 The NFL Playoffs are in full swing, but the focus for the Tampa Bay Bucs remains squarely on the search for former head coach Lovie Smith's replacement. Here's the latest and most interesting Bucs coaching rumor/news tidbits for Sunday, January 10th.

What's The Story With Dirk Koetter?
A popular notion after the firing of Lovie Smith was that the team was clearing space for offensive coordinator Dirk Koetter to take the reins. However, after interviews Arizona Cardinals OC Harold Goodwin and Carolina Panthers DC Sean McDermott for the head coaching vacancy, Koetter may not be a slam duck promotion for the Bucs.

Per Rick Stroud of the Tampa Bay Times:

"Don't believe Koetter, who did a terrific job with the league's fifth-ranked offense and rookie quarterback Jameis Winston, is a prohibitive favorite. The Bucs didn't fire Smith because they feared Koetter going to another team. The Dolphins, who asked to interview Koetter, hired Bears offensive coordinator Adam Gase as their coach Saturday."

To be fair, Stroud was one of the first Tampa writers to say that the Bucs fired Lovie Smith to keep Koetter around, even calling the move a "coronation" of sorts for Koetter. So, take all of this with a grain of salt for now.

But, one thing to take note of -- the San Francisco 49ers interviewed Dirk Koetter, per multiple media sources, and were said to be impressed. Thus, you'd expect the Bucs to decide quickly on Koetter before he agrees to terms with another team.

GM Jason Licht Has Final Say
Tampa Bay Bucs ownership has placed the team's search for a new head coach in the hands of GM Jason Licht. Licht is the only executive conducting interviews right now and he'll be the one to submit the final call on a coaching hiring to the Glazers.