Buccaneers 38 - Jaguars 31: 3 Things We Learned From Each Team 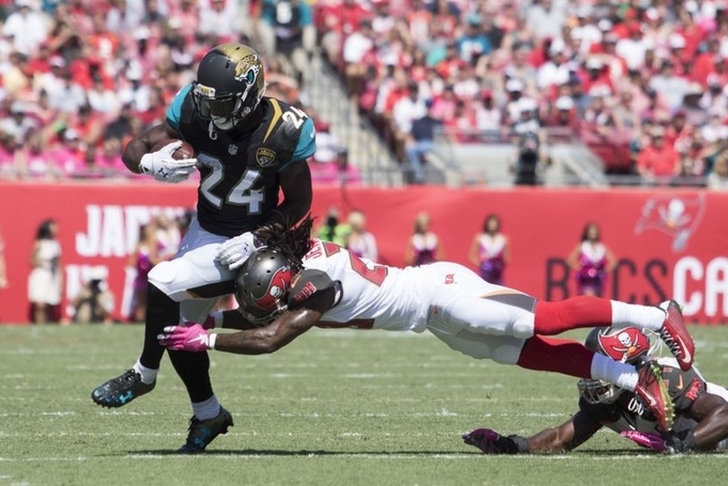 The Tampa Bay Buccaneers picked up their second win of the season with a surprisingly exciting 38-31 victory over the Jacksonville Jaguars. Here are three things we learned from both sides during the game:

Jameis Winson can be efficient

Winston was effeicient against the Jags, completing 13/19 passes for 209 yards and touchdown - without throwing an interception. We already know that Winston is productive (he's thrown for over 200 yards in every game this season), but his seven interceptions have absolutely killed that production. If he can continue to take care of the football, the Bucs have a real chance at turning their season around.

Doug Martin is back to being a top running back

Following two off years in which he was decimated by injuries, Doug Martin looks like he has regained his rookie form. He picked up 106 yards and two touchdowns on the ground against Jacksonville to go along with 35 receiving yards and another score in what was by far his best game of the year. He has now crossed the century mark and found the end zone for the second straight game, giving Tampa Bay a much needed rushing threat to take some pressure off of Winston.

Need to cut down on penalties

For an up-and-coming team to reach their full potential, they can't beat themselves - and that's what Tampa Bay nearly did today, committing 10 penalties for 72 yards. That's just the latest in a season long trend, as they're the second-most penalized team in the NFL. This is something they need to fix if they're going to become a playoff contender in the future.

Blake Bortles is the real deal

Bortles was pretty much the only reasons the Jags had a chance in this one, completing 23/33 passes for 303 yards and four touchdowns in a truly remarkable performance. However, it's only the latest in a line of good games for Bortles this season, who has thrown for 1,299 yards, 10 touchdowns, and just four interceptions through five games. He's starting to look like the franchise quarterback Jacksonville thought he'd be, and that's a great thing for the future.

Any rushing attack that relies on a rookie is going to have its ups and downs, but the Jaguars need to get their ground game figured out. Yeldon (259 yards) is the only running back that has more than 28 yards rushing this season, and they're one of just two teams (Dolphins) that haven't scored a rushing touchdown yet this season. That's catastrophic for any team, let alone one with a young quarterback and inexperienced roster.

Hurns has been thrown into action as one of Jacksonville's top receivers due to injuries to Allen Robinson and Marquise Lee, but the Jags may have found something in the undrafted second-year man out of Miami. He's gained at least 60 receiving yards in every game he's played this year, and has repeated 116-yard, one-touchdown performances in each of his last two outings. Hurns is still a young player and is developing, but he has all the makings of a legitimate No. 1 option.