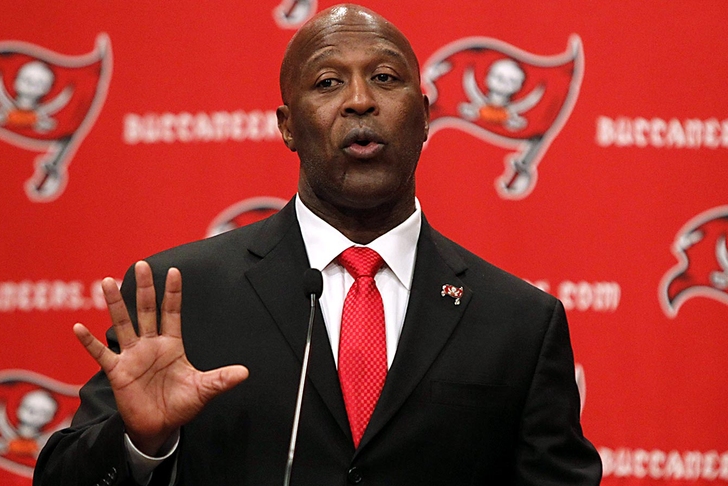 The first year of the Lovie Smith era didn’t go so well. The Buccaneers went 2-14, with major issues on both sides of the ball. The biggest on the offensive side was poor quarterback play and terrible offensive line play. With plenty of cap space, the No. 1 overall pick and development of some intriguing younger players, a worst-to-first in the NFC South isn’t a completely crazy thought.

1. Quarterback: Josh McCown is a replacement-level backup and Mike Glennon isn’t the answer. Tampa will have its pick of either Marcus Mariota or Jameis Winston.

2. Offensive Line: Guard Logan Mankins and tackle Demar Dotson were the only Bucs offensive lineman that Pro Football Focus gave a positive grade (subscription required). They’re keepers on the left side, but that’s it. Guard Patrick Omameh and tackle Oniel Cousins can not start next season. If Anthony Collins can shift to right guard or right tackle, that would make things easier on the Bucs. Center Evan Dietrich-Smith was serviceable.

3. Safety: Per Pro Football Focus, Dashon Goldson was the worst coverage safety in the NFL last season. The Bucs could save $5 million by cutting him, per Spotrac. Major Wright was serviceable, but is a free agent.

4. Middle linebacker: The Bucs lack a stud MLB in a defensive scheme that relies on having one. Mason Foster hasn’t been terrible, but an upgrade is needed over the free agent.

5. Cornerback: Alterraun Verner was great this season, while Jonathan Banks has promise. But, the Bucs don’t have much beyond those two. Depth and a nickel corner are needed.

6. Wide Receiver: Mike Evans is a stud and Vincent Jackson is a solid No. 2 and veteran leader, but the team needs depth badly. Louis Murphy was bad and is a free agent, although Russell Shepard could be worth a longer look. Jackson could be traded or cut.

7. Defensive Line: The Bucs have some quality (and expensive) pieces in Gerald McCoy and Michael Johnson, but depth is needed. Underachievers Adrian Clayborn and Da’Quan Bowers are free agents.

8. Running back: The three-headed attack of Doug Martin, Charles Sims and Bobby Rainey didn’t do that well. Still, Sims and Martin were high draft picks and the Bucs have more pressing needs. Expect the Bucs to try to shop Martin.

9. Punter: Michael Koenen was strong on kickoffs per Pro Football Focus, but got the wrost grade among all punters. Cutting him would save $3.25 million.

Will the Bucs draft Marcus Mariota?