Buccaneers Rumors: 3 Players Tampa Bay Should Target In The NFL Draft Are... 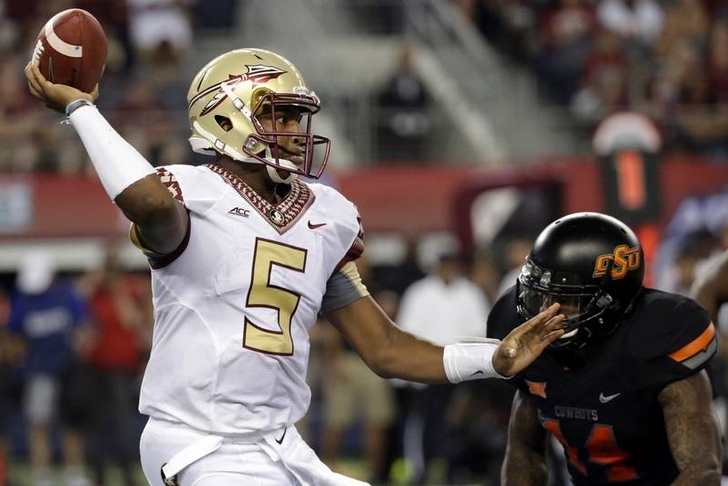 The Tampa Bay Buccaneers have more than a few needs heading into 2015…but the draft should give them a chance to address quite a few. Here are the players the Bucs should target in the draft: Josh McCown is in Cleveland, and Mike Glennon has had several chances to step up and take the job for himself, but hasn’t managed to convince his coaches or Tampa’s fans that he’s the long-term answer. With the #1 overall pick in the draft, Tampa has the chance to land someone with a significantly higher ceiling.

Jameis Winston and Marcus Mariota are both excellent prospects, and we won’t know for sure which is the better pick until we’ve seen them both playing on Sundays for a while. However, Winston is the more pro-ready prospect, and his football smarts and winning ways is what Tampa’s front office is hoping can turn their franchise around. There's a strong chance that Dupree could fall out of the first round, and if that's the case, Tampa won't pass on him in the second. At 6’4″, 267 lbs., Dupree has the size, strength, and speed that could make him a star in the NFL. He can move between outside linebacker and defensive end, making him valuable in both a 4-3 and 3-4 defensive scheme. His great hands and technical skills make him an extremely dangerous pass rusher, but he still needs to work on his coverage skills and rush discipline.

Guard Patrick Omameh and tackle Oniel Cousins were absolutely brutal in 2014, and Tampa needs to upgrade their offensive line if they want to give their new quarterback a chance to succeed. Tomlinson would fit in as a skilled, intelligent player who should be able to start right away as a rookie and have a long career.