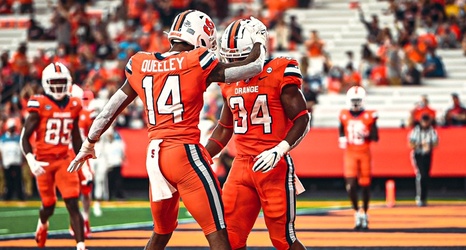 On a day filled with storylines – Andre Szmyt breaking the program's all-time field goal record and both contenders for QB1 having their last week of split reps, to name a few – it was perhaps Syracuse's quietest and most consistent weapon stealing the show.

Second-year freshman back Sean Tucker became the first player in program history to rush for 100+ yards and have 100+ receiving yards in the same game. He also notched five touchdowns (one shy of Jim Brown's program record) in little more than two quarters of action.