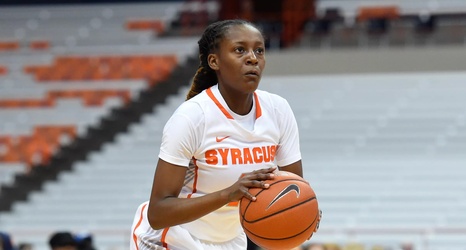 The Syracuse Orange women’s basketball team is gaining some national traction after a perfect 6-0 start and emerging as Paradise Jam Reef Division Champions a few days ago.

The Orange are officially ranked as of Tuesday, at least in one of the two major national polls. Syracuse received 60 total votes in the USA Today Coaches Poll, which jumped them up to No. 25 in the rankings.

Syracuse is the biggest mover in the poll, jumping five positions into the rankings up from the 30th-ranked vote-getter. South Carolina suffered the biggest drop as they went from No.