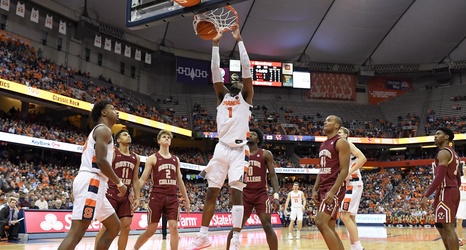 Whether we want to be or not, the Syracuse Orange and Boston College Eagles men’s basketball teams are rivals. And by decree of the ACC, we’re playing twice per season until the end of time. Lucky for us, SU’s won 10 of the last 12 games in this “rivalry,” though. So not the worst squad to face with some frequency.

SU comes in at 3-1 after a loss to Rutgers on Tuesday. Meanwhile, BC is 1-4 after suffering three straight losses to St. John’s, Florida and Minnesota, respectively. Now that you know that, what else are we watching out for when these teams take the court on Saturday at 1 p.