Syracuse gets in its own way in loss to Rutgers 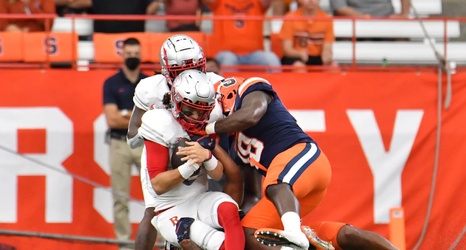 You can only survive shooting yourself in the foot so many times.

A mixture of penalties, lack of preparation, and bad play calling meant that Syracuse Orange couldn’t establish any offensive momentum against the Rutgers Scarlet Knights. The SU defense could only do so much as Rutgers won 17-7 on Saturday.

Penalties killed off numerous Orange offensive drives and pushed special teams backwards. Syracuse was called for at least three illegal formation calls on both offense and special teams to stifle any momentum gained. In the end, Syracuse was whistled for eight penalties, costing the Orange 55 yards.