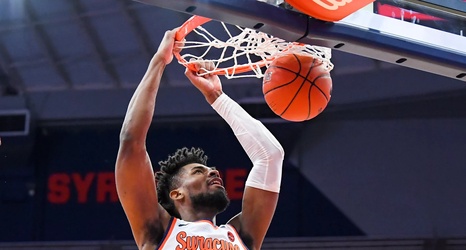 Quincy Guerrier’s 2019-20 season for the Syracuse Orange wasn’t a world-breaking year. He had three double-doubles but the Montreal native only averaged 6.9 points per game and 5.3 rebounds per game on 20.3 minutes per game. While Guerrier served as a nice first option off the bench, there didn’t seem to be much that would indicate that he would be a crucial player for Syracuse during the 2020-21 season.

Fast forward to the present day, and the Orange might have lost some of their early season games without the performance of Guerrier. The sophomore is averaging a double-double with 18 points per game and 10 rebounds per game, which leads the team in both categories.