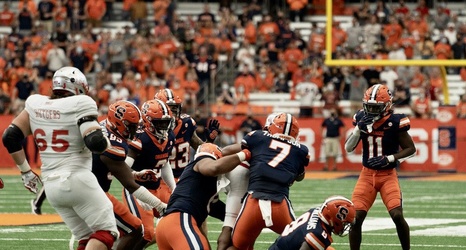 Syracuse’s defense didn’t allow any touchdowns against Ohio, and in the first half against Rutgers, the Orange looked as if they were going to repeat the end zone shutout. Mistakes from the offense left SU with a short field to guard on most drives, but its 3-3-5 defense held a Scarlet Knights squad that scored 61 points in week one to only 17 in the Carrier Dome.

Linebacker Mikel Jones said he still expected a shutout in the second half, despite Syracuse’s strong defense beginning to fold. But head coach Dino Babers said the offense and special teams were the real issues, giving credit to his defense’s performance against the Big Ten team.