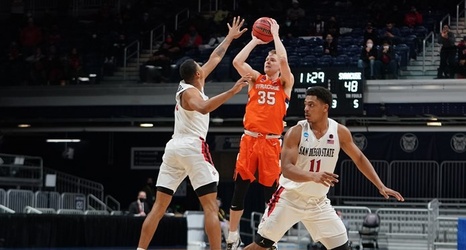 Syracuse senior guard Buddy Boeheim has been named to the initial watch list for the 2022 Jerry West Award. The group includes 20 players.

THE JERRY WEST AWARD
The award is named for Jerry West, the 1959 NCAA Final Four Most Valuable Player and a member of the Naismith Memorial Basketball Hall of Fame. The Award, now in its eight year, recognizes the top shooting guards in Division I men's basketball. West starred at West Virginia before embarking on a professional career with the Los Angeles Lakers. He was named to the NBA's 50th Anniversary All-Time Team, which was selected in 1996.