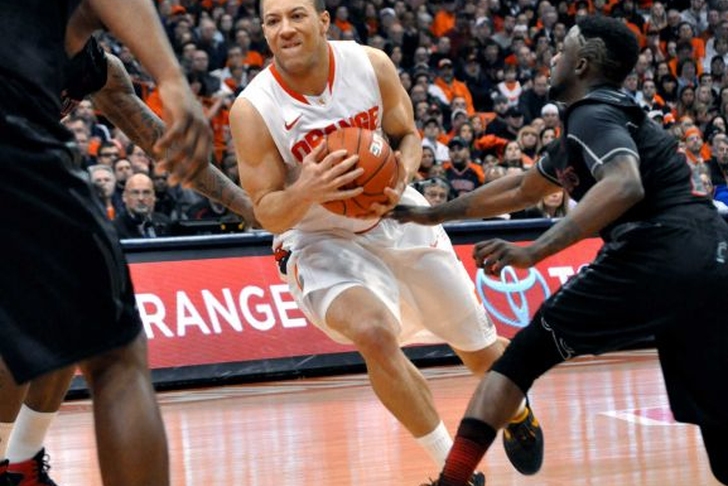 How good is Brandon Triche? Seriously, how good has he been this year? The answer: exceptionally good. Over the weekend, as Syracuse pulled out two close wins against two of the best teams in the Big East, it was Triche taking the lead and carrying the team on his back when they needed him the most.

Against Louisville, Triche scored 18 points in the first half, knocking down shot after shot and keeping Syracuse within striking distance against the top-ranked team in the nation. Triche ended up with 23 points, making 9 of his 13 shots, including 5 of 7 from three-point range. In the second half, with the defense tightening up on him, Triche deferred to others, allowing Michael Carter-Williams to shine and make big plays in clutch situations. Against Cincinnati, Triche was less effective, scoring 13 points on 6 of 13 shooting, but he was clutch, scoring on strong drives to the basket with his team trailing in the final minutes and making a picture-perfect pass to Jerami Grant for a dunk that ignited both the Carrier Dome crowd and the Syracuse defense.

Of course, what Triche did over the weekend against Louisville and Cincinnati has become par for the course. He has been exceptional all season, leading the Orange in scoring, all while playing on a team with little backcourt depth, playing alongside a point guard that had little experience coming into the season, and playing the last three games (and possibly more) without the team’s only other senior and second-leading scorer James Southerland.

For the last three seasons, despite starting every game of his college career, Triche has been content to play a complimentary role, and let the other guards on the team take the lead. But this year, Triche has finally shown flashes of the aggressiveness his game has been missing during his first three years at Syracuse. He has recognized what his team needs from him and has become less shy when it comes to looking for his own shot and being aggressive as a scorer. The first half of the Louisville game is the perfect example of what Triche is capable of when he asserts himself, and how he has started to take his game to the next level in his senior season.

Being a vocal leader has never been something Triche has been comfortable being, but as a senior he is leading by example and letting his actions speak louder than words. When his team walked into a hostile road environment against the top-ranked team in the country, Triche took charge and scored 18 first half points to keep the Orange in the game until the rest of the team was able to settle in. When his team trailed in the final minutes against Cincinnati, Triche took the ball and made winning plays that helped put the Orange back on top.

Of course, those are just the two latest examples of how Triche has stepped up his level of play in his senior season. He’s always been plenty talented, and how that he’s finally being aggressive and asserting himself, that talent is showing up even more, and showing up in key situations. Triche is finally becoming the player he’s always been capable of being, and he couldn’t have picked a better time, because these days, Syracuse really needs him.