Syracuse and Louisville: The Best The Big East Has Got 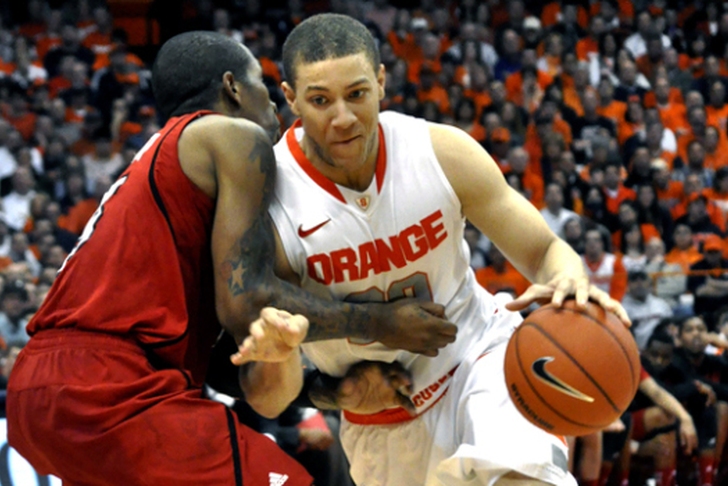 The Syracuse-Louisville basketball rivalry may not have the long and storied history that the Syracuse-Georgetown rivalry has, and it may not have the proximity and bitter hatred that the Louisville-Kentucky rivalry has, but over the last few years, it’s been the best rivalry in the Big East. What the rivalry lacks in history and blind hatred, it makes up for with great coaches, meaningful games, and memorable matchups.

Syracuse and Louisville may not share a long history with one another, but their head coaches do. Louisville head

coach Rick Pitino is the owner of a rather large branch on the coaching tree of Syracuse head coach Jim Boeheim. Pitino was the first assistant that Boeheim hired when he became the head coach at Syracuse in 1976, and as ESPN insists on reminding us every time Syracuse and Louisville meet, Boeheim interrupted Pitino’s wedding night so that the two coaches could hit the road recruiting soon after Boeheim was hired at Syracuse. While Pitino only spent two years as an assistant under Boeheim at Syracuse before becoming the head coach at Boston University, it has never been forgotten that Pitino is a disciple of Boeheim’s, in large part because both coaches have experienced great success with Boeheim amassing 906 career wins, with Pitino not too far behind at 640; but it’s also because the two keep bumping into each other.

Pitino spent two seasons as the coach of Providence, his first stint in the Big East, during which time he saw Boeheim plenty of times, with little success. The two also had the occasional run in during Pitino’s eight-year tenure at Kentucky. The most famous meeting between the two came in the 1996 national championship game, when Pitino’s Kentucky Wildcats fended off the underdog Syracuse Orangemen, as the protégé Pitino knocked off his mentor to win his only national championship, forcing Boeheim to wait seven more years before he won his first national title.

Louisville’s entrance into the Big East for the 2005-2006 season has allowed Boeheim and Pitino to see a lot more of each other over these past eight seasons, and one day the two coaches may once again meet on a regular basis, as members of the ACC. Of course, this past fall, before Louisville was invited to follow Syracuse and Pittsburgh into the ACC, Pitino and Boeheim exchanged some not-so-friendly fire about Syracuse’s final season in the Big East, with Pitino jealously claiming that the addition of Temple and Memphis would “more than make up for” the absence of Syracuse and Pittsburgh. Boeheim, somewhat amused at the absurdity that Pitino could possibly think that Temple or Memphis had the same caliber of basketball program as Syracuse, retorted that Pitino was “full of s**t” for saying something so obviously off base. On Saturday, the two coaches will shake hands and stare across the court at one another, for the first time since that blunt exchange, and for the first time since Pitino was made to look a fool by his comments due to Louisville’s invitation to follow Syracuse to the ACC.

Coaches aside, since Louisville joined the Big East, the Cards and Orange have put on quite a show, with a slew of games that have been both meaningful and memorable. The first meeting between the two teams as Big East opponents came in 2006, in a game that was a must-win for both teams and played in front of a large Carrier Dome crowd that was fueled by the presence of ESPN’s College Game Day. Led by 30 points from former star, now assistant coach, Gerry McNamara, Syracuse cruised to victory in the second half, winning 79-66.

The Orange may have won that first meeting, but the Cardinals would go on to win their next seven head-to-head matchups with Syracuse. However, even though the rivalry became a little one-sided for a few years in terms of the result, there was no shortage excitement between the teams. In 2009, the teams met in the finals of the Big East Tournament. Syracuse held an eight-point lead at halftime, but in the second half the Cardinals ran past an exhausted Orange team that was playing its 5th game in four days (seven overtime periods over the previous two games constitutes an additional game). By winning the game, Louisville was crowned Big East champions for the first time, after one of the most memorable Big East tournaments and one of the most competitive seasons in Big East history.

At the end of the 2010 season, Syracuse and Louisville met in the final game the Cardinals would play in Freedom Hall. While Syracuse lost the final home game they played in their outdated former home, Manley Field House, to rival Georgetown, an unranked Louisville team knocked off number one Syracuse to bid adieu to their long-time but increasingly rundown home venue. Previously unknown guard Kyle Kuric scored 22 points, all in the second half, to take down a Syracuse team that spent much of the season ranked in the top five, and was viewed by many at the time as the top favorite in the upcoming NCAA tournament. For Louisville, it closed out its long-time home in unforgettable fashion by toppling the best team in the land. It was also the second time the Cardinals beat the Orange that season, handing Syracuse two of their five losses in a season in which the Orange won the Big East regular season championship and looked destined to reach the Final Four before a late-season injury to center Arinze Onuaku.

In 2011, Louisville notched the final win of its seven consecutive against Syracuse in the Orange’s first visit to the Cardinal’s new home, the KFC Yum! Center: a name as ridiculous as the building is spectacular. Pitino’s short-term dominance of his former mentor infuriated Boeheim to the point that he lashed out against media members for only publishing his recent history against Pitino, and not including his lifetime record against his former assistant, which favors Boeheim.

In Syracuse’s second visit to the Yum! Center in 2012, the Orange was finally able to break their seven-game losing streak to the Cards, by holding Louisville scoreless for the final three and a half minutes of the game and escaping with a 52-51 win. Later that season, Syracuse beat Louisville 58-49, for a season sweep of the Cards on their way to a 17-1 conference record and another Big East regular season championship. Of course, Louisville would go on to win the Big East tournament and ultimately advance to the Final Four, while Syracuse fell one game short of the Final Four, once again derailed by the unexpected absence of their starting center.

On Saturday, we will see the next installment of the Syracuse-Louisville rivalry, as Boeheim and the Orange travel back to the Yum! Center, looking for their third consecutive win over Pitino and the Cardinals. The renewal of this rivalry, which has created plenty of excitement over the past half-dozen years, is bound to be a heavy weight fight. This season, in what will undoubtedly be the Big East’s swan song, Syracuse and Louisville have once again jumped to the front of the class. Both teams have been ranked in the top-10 all season, and neither shows signs of leaving anytime soon. Both teams are gearing up for a run deep into March, as both coaches eye an opportunity to win a second national championship. Both teams also have their sights set on a Big East championship, in the final year that a Big East championship will actually mean something, and they’re going to have to go through one another to get to it. Whatever happens between these two teams on Saturday, as well as later in the season, it’s going to be meaningful, and it’s going to be memorable; and that’s why the Syracuse-Louisville rivalry is the best the Big East has to offer, as it gets ready to close up shop.