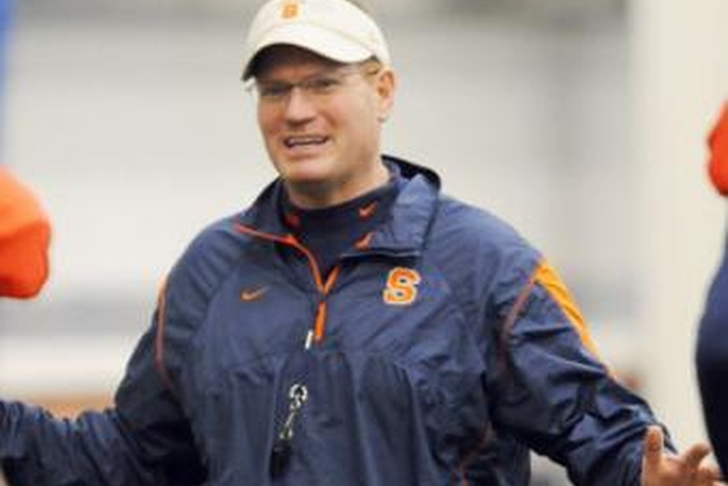 Aside from the 13 game days during the season, national signing day is the most important day of the year for college football teams, and in most cases it’s probably a little more important than at least one or two of those games. For Syracuse, recruiting has been a bit of a whirlwind since Doug Marrone and most of his assistants left for the Buffalo Bills and new head coach Scott Shafer assembled his new coaching staff and hit the recruiting trail. Let’s take a look at how the Orange faired on signing day 2013:

Syracuse received an early signing day present on Tuesday night with the commitment of Kendall Moore (Chicago, IL), who is an offensive lineman but will start out at Syracuse as a tight end because of his running ability and Syracuse’s need for a tight end that can block. However, after the addition of Moore, the Orange had no more pleasant surprises on signing day. There was, however, plenty of disappointment when defensive end Malik Brown (Palm Beach Gardens, FL), who committed to Syracuse in December, backed out on the Orange and signed with Tennessee, depriving Syracuse of what would have been a great addition to its pass rush. Syracuse did not receive commitments on signing day from any of the undecided players they were recruiting, as they were unable to add to any of the 19 commitments they had heading into signing day.

With the loss of running back Augustus Edwards, the gem of this class has become wide receiver Corey Cooper (Raleigh, NC). New offensive coordinator George McDonald had been recruiting Cooper while at Arkansas, and soon after McDonald made the move to Syracuse, he brought Cooper on board as well. Cooper had nearly two dozen scholarship offers and has the talent to compete for playing time right away, since there will be a lot of it available at wide receiver with the graduation of Marcus Sales and Alec Lemon. Arguably the top recruit on the defensive side of the ball is Marquez Hodge (Miami, FL). Hodge has the kind of speed at the linebacker position that Syracuse covets, which should make him a perfect fit for Shafer’s defense. Tight end Tyler Provo (Delray Beach, FL) is the younger brother of former Syracuse tight end Nick Provo, and if he’s anything like his brother the Orange will have another great player on their hands, as he’s capable of playing tight end, H-back, and fullback. A big strength of this class is a quality group of junior college players, including defensive tackle Wayne Williams (Brooklyn, NY), safety Darius Kelly (Sierra Vista, AZ), and defensive end Trevon Trejo (Huntington Beach, CA). Williams will give an already stout-looking defensive line even more size in the middle with his 6’6’’ 335 pound frame; Kelly will add much-needed depth to the Syracuse corps of safeties while also competing for a starting spot; and Trejo is a pure pass rusher that will help make up for the loss of Brandon Sharp as an edge rusher.

One Syracuse recruits who’s been committed since June is defensive end Isaiah Johnson (Elkton, MD). Johnson is already enrolled, so he’ll have a head start, but with a stacked defensive line already in place for the Orange, it could be a while until Johnson plays a significant role on the team, but when he does get his chance, Johnson will be ready to make an impact. A late addition to Syracuse’s recruiting class was athlete Brisly Estime (Delray Beach, FL). Estime is undersized at 5’9’’, so he may be easy to overlook, but he has incredible athleticism and could find a home at either wide receiver or cornerback, as well as a kick returner, where he is dangerous in space. Syracuse has a couple more sleepers along in the offensive line in Alex Hayes (Tucker, GA) and Jonathan Burton (Fork Union, VA). Hayes was a player that the new coaching staff sought out that didn’t have a lot of offers, but offers a lot of promise. Meanwhile, Burton has monster size at 6’8’’ and 310 pounds, and while it might take him a few years to develop, he could potentially be a beast at offensive tackle for the Orange down the road. Coming out of the junior college ranks is linebacker Luke Arciniega (Sparks, NV). After committing to Nevada out of high school, Arciniega spent some time away from football, but returned to junior college to play last semester and performed well. Arciniega gives Syracuse a lot of size at linebacker at 6’4’’ 245 pounds, and will compete for a spot at middle linebacker.

If Syracuse still has the goal of building a wall around New York State, it really struggled to do so this year. Syracuse only signed two players that call New York home in Williams and defensive back Chauncey Scissum (Henrietta, NY). They not only failed to haul in the top recruit in the state, something they’ve grown accustomed to, but they also lost out on several key recruits that at times they were close to bringing in, including Ebenezer Ogundeko (Clemson), Augustus Edwards (Miami), and Laray Smith (Indiana). Syracuse once dreamed of landing the trio of Ogundeko, Edwards, and Smith, but missing out on all three is nothing short of a disappointment. New York State aside, Syracuse, especially with the addition of new offensive coordinator George McDonald, did great work in the south, bringing in five players from either Georgia or Florida. The new coaching staff also brought Syracuse into new territories, signing two players from Illinois, one from Missouri, and one from North Carolina, areas where Syracuse hasn’t had much of a presence in the past, but could be more active in the future. The trend of bringing in junior college players from the west coast also continued for Syracuse in this class with the additions of Kelly, Trejo, Arciniega, and offensive lineman John Miller (Wilmington, CA).

This class would have looked much different had Marrone stayed, but considering the coaching change, the new staff did a fine job of keeping the class in tact and finishing strong. They did well to address the quarterback position with long-time commit Austin Wilson (Enola, PA) and relative newcomer Mitch Kimble (Jerseyville, IL), two guys that should become factors at quarterback within a year or two. With the coaching change, Syracuse essentially swapped two running backs in Edwards and Smith for two wide receivers in Cooper and Corey Winfield (St. Louis, MO), making it a relatively even swap of playmakers. The staff also addressed a need at tight end with Moore, Provo, and Aaron Batten (Miami, FL). An already strong defensive line was made even stronger with the additions of Williams, Johnson, and Trejo, while the linebacker position received some much-needed depth with Hodge, Arciniega, and Josh Kirkland (El Dorado, KS), another junior college transfer. The additions along the defensive front-seven are dominated by athletic pass rushers, which signals a continuation of Shafer’s philosophy of being aggressive on defense and getting after the quarterback. The wildcard of the class could be Estime, who could have a chance to make an impact in all three phases of the game, after being a hidden gem that Shafer and his staff found late in the recruiting cycle.

Overall, this class probably takes at least a half step back from the previous two classes Syracuse has signed. There were some key recruits that slipped away, and some guys that could have been added late to make the class bigger and better. Of course, in the context of a coaching change, those things become understandable, and are balanced out by the impact that the new coaching staff was able to make in such a short period of time. It’s not the ideal class to venture into the ACC with, but Syracuse is a program that has to rely more on great development than great recruiting anyway, and to a certain extent, it showed what the new coaching staff is capable of producing. We obviously won’t know anything for sure regarding this class for a few years, but if nothing else this class will be remembered for playing a role in helping the mostly seamless transition from Marrone to Shafer, and for that, this class has given Syracuse just what it needed.