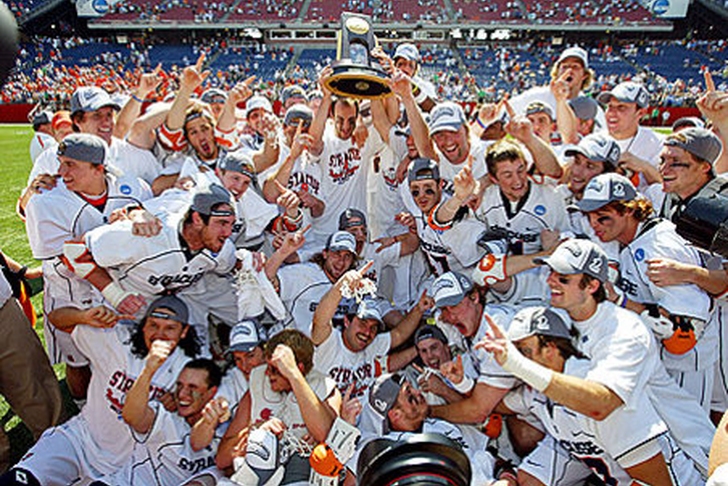 It’s been a long drought for the Syracuse Orange men’s lacrosse team, but heading into their quarterfinal game against Yale in the NCAA Tournament tomorrow, the top-seeded Orange appear poised to advance to the Final Four in Philadelphia Memorial Day Weekend and take home the school’s record twelfth national championship. This year’s senior class has yet to even play in a Final Four, much less win a national championship, but this team has all the ingredients to ensure its seniors don’t become the first senior class at Syracuse to miss out on championship weekend.

The Orange took care of a pesky Bryant team Sunday night in the Carrier Dome, meaning they are just one win away from the Final Four and three wins away from a national championship. This year’s team has beaten the first-round stigma that stung the Orange in 2010 and 2012, and now that a shot clock has been introduced to college lacrosse in lieu of meaningless stall warnings, the Orange know that they won’t meet the same fate of the 2011 team, when they were beaten by a lesser team that won possession and then sat on the ball, refusing to attack the goal when they had a lead. With the rule change, the Orange no longer have to worry about their inability to win face-offs costing them, which means that the path is clear for the tournament’s top seed to prove in the playoffs what they proved during the regular season, which is that they’re the best team in the country.

To say that Syracuse’s ineffectiveness on face-offs was exposed against Bryant would be redundant; everybody already knew the Orange are weak at the X. Aside from a one-goal loss to Villanova early in the season, Syracuse hasn’t paid the price for struggling on face-offs, and it’s not because they’ve been lucky, it’s because they’ve been good. Syracuse is strong in areas that allow them to make up the disparity in face-off wins that they usually face, almost making it a non-issue. First, Syracuse has a goalie in Dominic Lamolinara who has improved as the season has gone on, and is now playing at a championship level. The Orange also boasts one of the top close defenders in the country in Brian Megill, who is joined by two more quality close defenders in Sean Young and David Hamlin. Syracuse also has a trio of tall and athletic long-stick midfielders in Joe Fazio, Matt Harris, and Peter Macartney, as well as arguably the best group of short-stick defensive midfielders in the country, led by Steve Ianzito and Matt Pratt. While they may not be the elite-level defense that the Orange had during its most recent national championships, it’s a defense capable of getting stops and forcing turnovers to offset the team’s struggles on face-offs. In addition to the a strong defense and good goaltending, Syracuse has already gone up against the best face-off man in the country, so nobody they see the rest of the tournament will be better than what they faced against Bryant, which makes their trouble at the X less of a concern.

The other attribute Syracuse has to off set their troubles at the face-off X is an efficient offense, which in many ways is a poor-man’s version of the offense Syracuse had in 2008 and 2009, which is more of a compliment that it sounds. During Syracuse’s two most recent championship years, they had a deep and star-studded lineup on the offensive end that helped lead the team to victory during championship weekend. This year’s team is younger and has fewer established stars, but they are just as deep, with a multitude of players that can contribute to the team’s scoring on a regular basis, much like Syracuse’s championship teams of the past.

The Orange have displayed an uncanny ability to share the ball on offense this season, with Kevin Rice emerging as the quarterback of the offense from the attack position and Tewaaraton Finalist JoJo Marasco being a distributor and playmaker from the midfield. That unselfishness combined with the Orange’s motion offense has opened up scoring opportunities for attackman Derek Maltz and Dylan Donahue, as well as midfielders Scott Loy and Luke Cometti. Syracuse’s offense also possesses one of the top second midfield lines in the country, featuring Henry Schoonmaker and Hakeem Lecky, giving Syracuse the kind of depth that few teams have, which could make all the difference Memorial Day weekend. Syracuse supplements its six-on-six offense with Matt Walters and Derek DeJoe, two long-range shooters that give the Orange a man-up unit that’s difficult to defend, especially with all the motion and ball movement the Syracuse offense features.

Syracuse isn’t overwhelmingly talented, nor have they dominated their opponents this season, and they certainly have their deficiencies, but they have the ingredients necessary to win a national championship. The Orange are team-oriented on both offense and defense, and their roster is among the deepest in the country. They have come back from deficits to win close games all season long, doing so against quality teams. Syracuse has found ways to win games all season, and they appear poised to win three more games in the NCAA Tournament, and put an end to their championship drought.