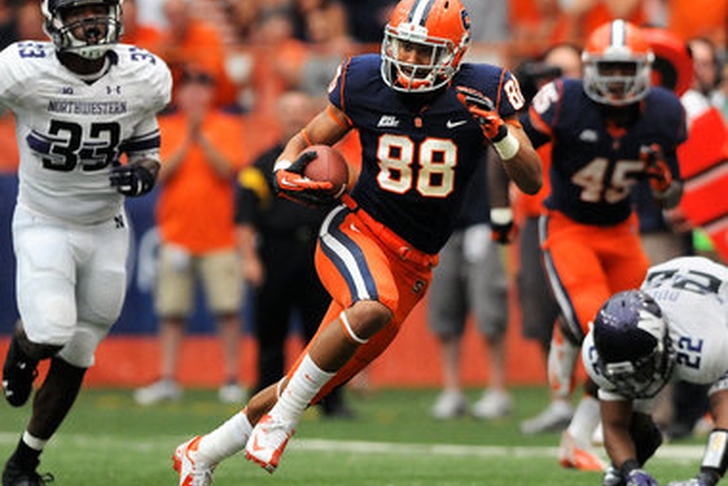 This competition is as wide open as it gets. Jarrod West is the only receiver that made significant contributions last season, and while he has to play a bigger role this year, he needs a lot of help around him. Jeremiah Kobena and Chris Clark played some last year, and they’ll be counted on again this season to extend the field vertically with their speed and pose a deep threat to opposing defenses, which means both should see plenty of the field, but just how much is yet to be determined. The two players that Syracuse needs to push for starting spots and have breakout seasons are senior Adrian Flemming and Arkansas transfer Quinta Funderburk. Both a big targets and may be the most talented receivers on the roster. Flemming is penciled in as a starter despite having no catches in his first three seasons, while Funderburk is buried on the pre-season depth chart, but both have the potential to be difference makers for the Orange this season. The names to watch among young receivers competing for a spot are Corey Winfield, Bristly Estime, and Alvin Cornelius. Winfield is a true freshman with great leaping ability; Estime is a true freshman with little size but tremendous speed; and Cornelius brings a nice combination of size and speed. With so many options, something surely has to give. Outside of West, nothing is for certain in this group, and it should take at least until the end of training camp, probably longer, until things start to clear up, in part because there are so many options, but also because Syracuse has so little experience at wide receiver.

The three starting positions are all but spoken for by Marquis Spruill, Dyshawn Davis, and Cameron Lynch, but Syracuse will want to develop a deep rotation at linebacker if it can, and there are also plenty of guys that would like to challenge the incumbents for their starting spots. Junior college transfers Luke Arciniega and Josh Kirkland went through spring practice and would like to get on the field right away. Arciniega especially is a guy to watch, as he is the biggest and most physical linebacker the Orange have on their roster. Another guy to watch is senior Lewellyn Coker, who has played a lot of special teams over the last three years, as well as some fullback, but he’ll want to get some time on defense before his career is over, and has the potential to be one of the biggest hitters on Syracuse’s defense. Sophomore Oliver Vigille and true freshman Marquez Hodge are two more players to watch. Vigille brings some size and strength to the table, while Hodge is undersized, but has tremendous speed, much like Lynch, who also played as a true freshman, and Syracuse could be looking to get his speed on the field this season. Finding depth at linebacker is another area where the Orange have a lot of candidates, but no one that’s a proven player, which should work itself out as training camp continues.

There’s little doubt that Beckett Wales will be the starter, but with four of the tight ends on last year’s roster leaving the program for various reasons and Ron Thompson switching over to defense, there’s a lot of playing time available behind Wales. Redshirt freshman Josh Parris could have gotten on the field last year if the position wasn’t so crowded, and he should be the favorite to be the backup. The Orange also have true freshmen Tyler Provo and PJ Batten, who may be forced onto the field early in their careers because of a lack of depth at that position. There’s also a chance for Kendall Moore, a true freshman who signed with Syracuse as an offensive lineman, but who was promised an opportunity to play tight end as well. With so many question marks at wide receiver, the Orange will need their tight ends to step up and become viable receiving options, which means out of Parris, Provo, and Batten, Syracuse needs someone to step up during training camp, because having Wales at tight end isn’t enough.

This is the competition that everybody is watching during training camp. A week into training camp and a four-man competition is already down to two. First, John Kinder left voluntarily to try his hand at wide receiver, and all indications are that Terrell Hunt and Oklahoma transfer Drew Allen have separated from Charley Loeb. Hunt and Allen appear to be neck and neck, with Hunt possibly holding a slight advantage at the moment. Hunt has had more time with the offense and more time with the wide receivers, so his command of the offense is understandably better, which is something the coaches have been looking at early in camp. However, Allen has impressed with his arm strength and his ability to move the ball down the field. There’s a lot left to determine, and unless something unforeseen happens, it should be at least another couple of weeks, possibly longer, until there is any kind of decision on who will start the season opener against Penn State.