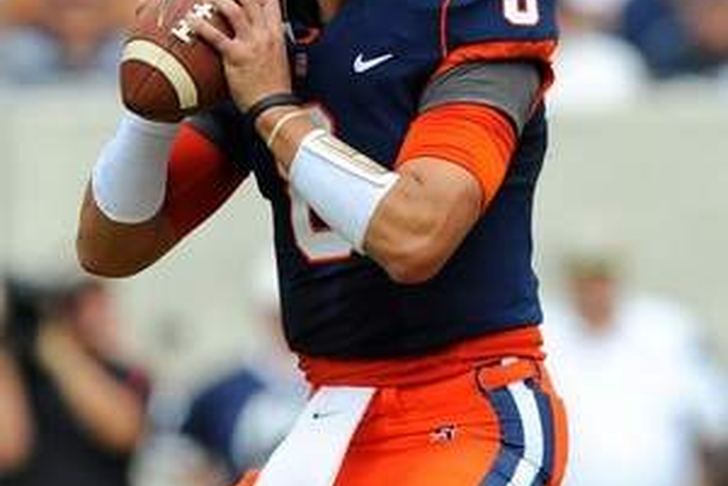 Despite the loss in its season opener against Penn State, the Syracuse defense came as advertised, if not better; they were aggressive, they hit hard, and most importantly, they forced turnovers, four turnovers to be exact. However, the same thing can’t be said about the Syracuse offense, which made a lot of mistakes and failed to capitalize on opportunities set up by the defense that could have been the difference between winning and losing.

The worst offender on the sluggish offense was undoubtedly starting quarterback Drew Allen. After so much hype and expectations surrounding the Oklahoma transfer, his debut was disappointing and a giant let down. After a promising start, Allen struggled for much of the game and completed only 17 of his 38 passes. Despite being in his fifth year of playing college football, Allen looked inexperienced and showed few signs of being the kind of quarterback that’s ready to lead a team for a 12-game season in a major conference.

From the beginning, Allen was out-of-sync with his receivers and didn’t appear to have command of the offense or the playbook. On far too many occasions, Allen threw the ball when his receiver wasn’t expecting it, and there were even moments when the running back lined up behind Allen wasn’t sure which side the hand off would be coming from. Even when continuity wasn’t an issue, Allen’s accuracy with the ball was. Several of his throws towards the sidelines sailed out of bounds, making it impossible for his receiver to catch the ball and stay in bounds. He made other throws down the field into tight coverage, giving his largely unproven group of receivers little chance of making the catch. Even more disconcerting was his accuracy on short throws, which was atrocious when he had opportunities to get his playmakers the ball with plenty of space in front of them. The two interceptions he threw were perhaps the most egregious plays of the game, as they were nowhere close to being completed and doomed the Orange.

There’s no doubt that some fans will be clamoring for Allen to be benched in favor of Terrell Hunt. However, such a move would be premature and unwarranted. After an extended competition between Allen and Hunt in training camp, one has to wonder if Allen didn’t receive enough reps in practice to be ready to gel with the rest of the offense, especially after not showing up on campus until summer. Allen made just enough positive plays and impressive throws to showcase his talent and potential, and he deserves at least one more week as the starter, especially since college teams generally make the most progress between games one and two. With another challenging Big 10 in Northwestern on the slate for next week, the Orange can’t afford to scrap their offensive plans and start from scratch by making significant personnel changes.

Of course, Allen wasn’t the only problem for the Syracuse offense; the run game was also slow to get going, as Jerome Smith and Prince-Tyson Gulley rushed for just 96 yards combined. Offensive coordinator George McDonald deserves credit for not abandoning the run, but aside from a few nice runs from Smith, the Orange did not pick up significant chunks of yards on the ground consistently, and it was shocking to see a tandem as potent as Smith and Gulley not break the century mark. Of course, little of the blame is on the backs themselves, as the Syracuse offensive line did not win enough battles at the line of scrimmage and failed to open up many holes for Smith and Gulley to run through.

Finally, there are the receivers, who were underwhelming, although that came as no surprise. Syracuse does not have an established group of receivers, and it showed. They struggled to get separation, which may have been a contributing factor on some of Allen’s errant throws. However, there could be two silver linings to the Orange’s corps of receivers. The first is that with just 17 completions, Allen connected with nine different receivers, showing that he can spread the ball around and that Syracuse at least has a myriad of potential targets in the passing game. The second is that Ashton Broyld led the team with five catches and looks more comfortable than last season and looks like a bigger part of the offense than last season.

Despite a few silver linings, the Syracuse offensively deserves a majority of the blame for the loss to Penn State. The dynamic and high-powered unit we saw the last seven games of 2012 was nowhere to be seen at Met Life Stadium against Penn State. It may not have been prudent to think the Orange offense would pick up where they left off last season, but there’s no denying that the Syracuse offense is a far cry from where it needs to be if the Orange are going to have a successful campaign in 2013.