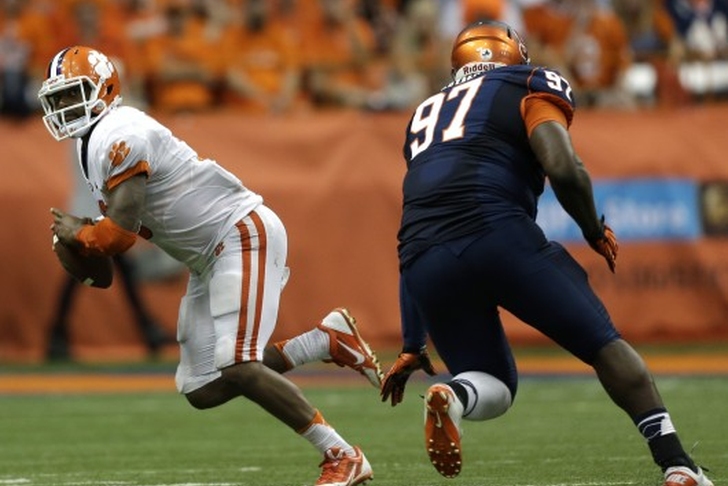 The ACC did no favors to its two newcomers when they scheduled Pittsburgh to open up the season against Florida State and set up Syracuse to play its first ever ACC game against Clemson. The Panthers got a rude welcoming to the ACC back on Labor Day, and Saturday in the Carrier Dome, Syracuse got the same. The Orange put up a fight, but ultimately they were no match for the third-ranked Tigers and a myriad of pro prospects, including quarterback and Heisman Trophy candidate Tajh Boyd.

The crowd inside the Carrier Dome did not disappoint, as the building was nearly filled to capacity with the largest crowd in 13 years. However, the air was sucked out of the building three plays into the game when the Tigers struck on the first of several long pass plays that became the Achilles heal of the Syracuse defense. The Orange saw little of the ball throughout the first quarter and couldn’t get things going offensively, and before they knew it they were down 21-0 at the end of the first quarter, leaving them little hope of coming back.

After breezing through Wagner and Tulane, the Orange faced athletes the likes of which they haven’t seen in years. Clemson’s wide receivers are dynamic athletics with NFL talent. Boyd is a dual threat quarterback that can throw down field, run away from trouble, and deceive defenses with play fakes like few quarterbacks can do. Defensively, the Tigers were faster, quicker, and hit harder than any defense Syracuse has seen in recent memory. Schematically, the Tigers were able to take advantage of Syracuse’s aggressiveness on defense, which played right into the hands of Boyd’s unique skill set.

But if there’s one thing that can be said about Syracuse, it’s that they responded well to adversity and never quit, which was fully expected of Scott Shafer’s team. After being blitzed for 21 points in the first quarter, Jerome Smith ran for a 66-yard touchdown on the first play of the 2nd quarter. Later, down 28 at halftime, the Orange didn’t pack it in and quit. Instead, they outplayed Clemson for much of the 3rd quarter, scoring on the first drive of the half, and then forcing one interception and a pair of three-and-outs defensively. For a brief moment, the Orange were on the verge of making it a game, but athletically, they simply didn’t have the wide receivers that could get separation on a consistent basis, which made it difficult to capitalize on their opportunities to get back in the game in the 3rd quarter.

The loss is obviously tough to swallow for Syracuse in its ACC opener, but it’s important to keep in mind that Clemson is not necessarily emblematic of the rest of the conference. The Tigers are a legitimate national championship contender and no other team in the ACC is likely to have the same talent level or scheme sophistication on the offensive side of the ball. Thus, its first ever ACC game may be the toughest test Syracuse faces in its new home for a long time to come, while Clemson fans can finally put to rest their bitterness over the 41-0 defeat suffered at the hands of Donovan McNabb and Syracuse in the 1996 Gator Bowl, as the all-time series between the two schools is now tied at one win a piece.

As for the current Syracuse team, they now turn their attention to their first ACC road game against North Carolina State, who should be a more even matchup for the Orange than Clemson. The Orange can’t afford to hang their head after getting beat by a better team, nor should they, as they did not get beat by Clemson due to lack of effort. For the time being, Syracuse will have winnable games against their new ACC brethren, and despite the sour taste in their mouths following their ACC opener, they will have a realistic chance of winning their next few games and proving they belong in their new conference.