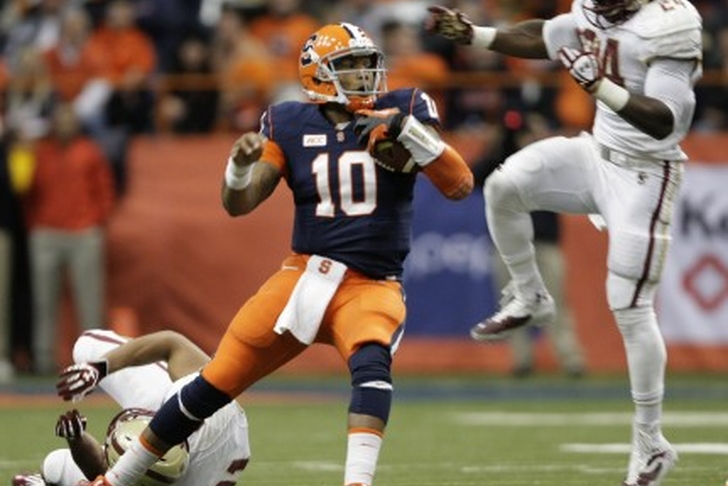 With the Syracuse Orange heading to a bowl game and finishing 3rd in the ACC Atlantic Division, it’s hard not to consider the 2013 season a success. With the team as a whole receiving a passing grade, let’s take a look at how each position graded out for the 2013 season.

Terrell Hunt definitely went through some growing pains during his first season as a starter, and four games with less than 100 yards passing is unacceptable. But he had his moments, and for an inexperienced quarterback with somewhat limited arm strength, a 60% completion percentage and a positive touchdown-interception ratio is viable, and the team did win games with him. It’s also important to keep in mind that his running ability was an invaluable part of the offense. As a whole, it wasn’t a great season for Syracuse at the quarterback position, as Hunt is definitely a little below average, but he finished strong and the team won six of the 10 games he started, so that’s a nice silver lining.

Running backs were clearly the strength of the offense with four different backs combining for over 1,800 yards. When Syracuse was having success this year it was because they were pounding the ball on the ground and wearing teams out over the course of the game, and that was due to a stable of talented backs that had nice seasons in 2013.

This was a problem area for the Orange all season. Ashton Broyld was one of the few players that stood out, and even he had his ups and downs on his way to being the team’s leading receiver with a little over 400 yards. Jarrod West and Chris Clark were decent, but both could have been a lot better, and Jeremiah Kobena was a big disappointment. Freshmen Brisly Estime and Alvin Cornelius did come on strong the second half of the season, but that doesn’t make up for a season full of struggles and inconsistencies for the Syracuse wide receivers, who didn’t do enough to help out their young quarterback.

Syracuse had a lot riding on Beckett Wales coming into the season, but he ended up with just 10 catches on the season and only one or two of those came in meaningful situations. The Orange did get good contributions from freshmen Josh Parris and Kendall Moore, but not enough to make up for the disappointment from Wales.

This group started slow, but came on strong later in the season. Along with the running backs, they get a lot of the credit for slowly wearing down teams in several of Syracuse’s wins this season. Macky MacPherson was an invaluable part of the team and Sean Hickey did well to fill the void left by Justin Pugh at left tackle. The other three offensive linemen are all sophomores that showed improvement throughout the season. The group allowed just 17 sacks for less than 100 yards during the season, and while part of that is due to Hunt’s running abilities, that’s an impressive stat, especially for a young group that could return four starters next year.

This group was solid but unspectacular for much of the season. The front four didn’t always do a good job of putting pressure on the quarterback, but they were great at stopping the run, going the entire season without allowing a 100-yard rusher, and shutting down a Heisman Trophy candidate the final game of the season. Jay Bromley had a brilliant season and he ultimately had a decent supporting cast around him.

This was the strength of the entire team. Dyshawn Davis was underwhelming at times and struggled through injuries, but Marquis Spruill and Cam Lynch both had great seasons and were constantly making plays all over the field. Syracuse also showed plenty of quality depth at linebacker with Luke Arciniega, Josh Kirkland, and true freshman Marquez Hodge all making contributions.

It’s in the nature of Syracuse’s scheme that the secondary will give up big plays, and they certainly had plenty of ugly moments, but this group had a decent season. They survived key injuries to Keon Lyn and later Julian Whigham at cornerback, while getting steady play at safety. Durrell Edskridge had a breakout season and should get even better; Jeremi Wilkes made a lot of key but unheralded plays; and the trio of Ritchy Desir, Darius Kelly, and Wayne Morgan all made their presence known.

Missed opportunities in the kicking game came back to bite the Orange this season, but the rest of the Syracuse special teams were quite good. There were some issues with punting early in the season, but Riley Dixon eventually settled in and had a nice season, while the coverage teams were the best Syracuse has had in several years.

Offensive coordinator George McDonald brings this grade down some, but considering the head coach and much of the staff was new, the coaching was fine this season. The Georgia Tech game counts as a massive failure, and obviously there were a couple of other blowouts, but this team was resilient, responded well to adversity, and exceeded all outside expectations, which reflects on the coaching staff. With the turnover on the staff, the personnel losses from last year, and the move to a new conference, there was a lot to deal with, but Scott Shafer handled it well, and at the end of the day, he got the most out of his talent and reached their goal of getting to a bowl game, moving the program another step forward.