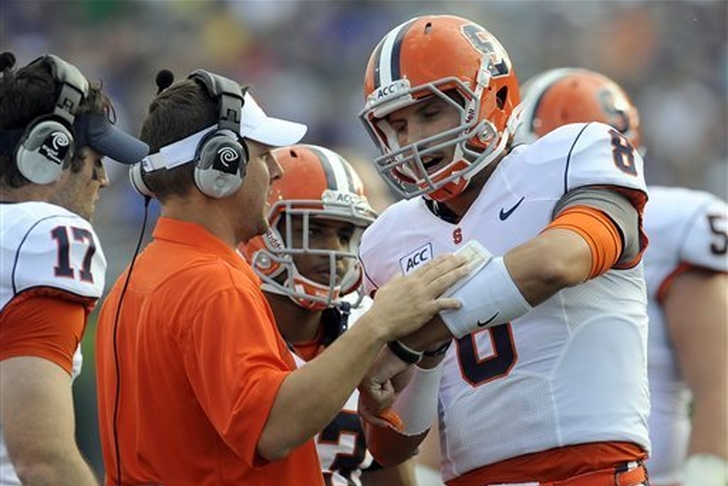 Just two weeks into the 2013 season and already Syracuse rookie head coach Scott Shafer is facing uncertainty at the quarterback position. A preseason quarterback competition that ended with Oklahoma transfer Drew Allen being named the starter appears to be reopening, as the Orange have fallen to 0-2 to open the season.

After two games, it’s obvious that Allen has talent and it’s obvious why he was given a chance to be the starter; he looks the part of a starting quarterback and has great arm strength, which allows him to throw the ball downfield with ease. However, it’s also become obvious why he hasn’t won a quarterback competition since high school; he struggles going through his progressions, often staring down his intended receiver, and he isn’t always the most accurate passer, especially on shorter throws when he needs to have pinpoint command, but doesn’t. He has also had an inordinate number of tipped passes, which is odd for such a tall quarterback, and is a problem that will only lead to trouble.

After struggling throughout the first six quarters of the season, Allen and the offense got going a little bit in the second half this past weekend against Northwestern, albeit when the Wildcats had a sizeable lead, but any progress he might have made was negated by the four interceptions he threw against the Wildcats. Allen might have all the physical tools you look for in a quarterback, but four interceptions under any circumstances is unacceptable, as Syracuse won’t be able to win many games this season if they continue to turn the ball over at such a high rate.

After Allen’s struggles, as well as the hit he took following his fourth interception, Terrell Hunt finished the game at quarterback for the Orange. While Hunt played against Northwestern’s backups in a no-pressure situation, he was impressive. Hunt looked comfortable with his receivers, he commanded the offense, and he showed great athletic and running ability, a dimension Allen lacks, as he led the Orange on a touchdown drive that he finished off himself by running the ball into the end zone. It might not have been much, but considering Allen’s struggles and how close the competition appeared to be during training camp, it’s enough to at least consider re-opening the quarterback competition.

After the game, Shafer was nothing short of uncertain over the quarterback situation. He did his best to show his support for Allen, while downplaying Hunt’s success by mentioning the circumstances of the game during his one drive, doing whatever he could to avoid sending the message that there was a controversy afoot. However, Shafer’s conclusion was that next week he would play whoever was ready, and if that means playing both quarterbacks than so be it, which clearly leaves things open and undecided heading into Syracuse’s home opener this weekend.

If ever there’s a time to open up a quarterback competition in season, it’s now. With two tough opponents in the first two weeks of the season, it would have been disruptive to the offense to play multiple quarterbacks; however, with FCS school Wagner coming to the Carrier Dome on Saturday, it’s the perfect opportunity to give meaningful playing time to both Allen and Hunt. The point of playing both would be to clear up the quarterback situation before Syracuse completes its non-conference schedule and begins ACC play, and getting both candidates game experience with the first team while playing against the opposing team’s starters is the best way to do that, and since Syracuse plays Wagner and Tulane the next two weeks, now is the time.

Allen has not done enough to solidify the starting job moving forward, and with Hunt winning the job after spring practice and showcasing an impressive skill set in mop-up duty against Northwestern, he shouldn’t be counted out, which means the job is still there for the taking. This doesn’t have to be a controversy, but the only way to prevent uncertainty at the quarterback position and a potential controversy deep in the season is for Shafer to give playing time to both over the next two games, with the hope that one of them can win the job convincingly and lead the team for the remainder of the season.