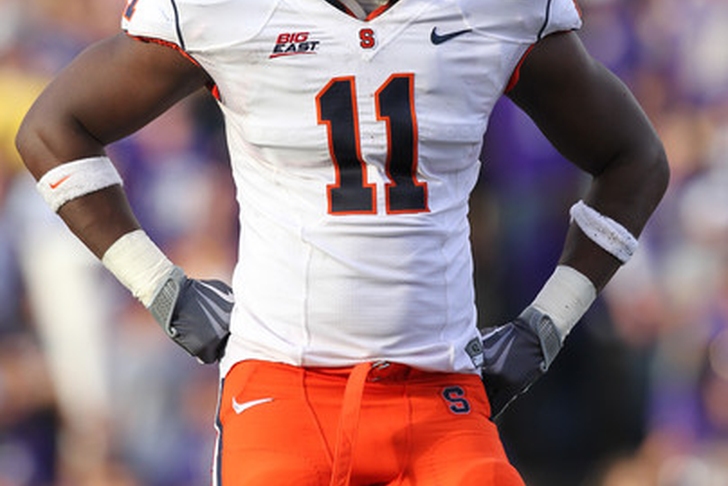 We’re less than two weeks away from the start of the college football season, so it’s time to take a closer look at the Syracuse football team. We’ll start with the defense, where upon becoming the head coach Scott Shafer has passed the reigns to Chuck Bullough, who will be orchestrating the Orange defense this season.

The defensive line is the biggest area of concern on defense, after losing seniors Brandon Sharpe and Deon Goggins from last year’s team, as well as Markus Pierce-Brewster to an off-field discretion during the offseason. The lone returning starter is Jay Bromley, who will lead what could be a productive group of interior linemen. Junior Eric Crume, senior Zian Jones, and Iowa transfer John Raymon are all big bodies that should be able to clog the middle for the Orange. Syracuse will need to rely on their interior linemen to get a strong push, because there are no established pass rushers along the defensive line. Robert Welsh and Micah Robinson are expected to start at defensive end, and while both could be steady contributors, neither will be a threat coming off the edge. Redshirt freshman Ron Thompson, junior college transfer Trevon Trejo, and true freshman Isaiah Johnson are all candidates to rotate in at defensive end, and while they offer more pure talent and promise than the starters, they are all less polished and less experienced. The Syracuse defensive line should be able to hold its own against the run, but they need at least a few players to emerge as viable pass rusher, or else Bullough will have to find creative ways of putting pressure on quarterbacks, which would put more pressure on the back-7 of the defense.

The middle of the Syracuse defense should be the biggest strength of the defense, as they return three linebackers loaded with experience. Senior Marquis Spruill will be a four-year starter, as he moves back to middle linebacker, where he played his sophomore season. On the outside are juniors Dyshawn Davis and Cameron Lynch. Davis is a three-year starter, and both he and Spruill should be among the 10 best linebackers in the ACC this season. Lynch will be a starter for the first time in his career, but he’s played almost as much as a starter over the past two seasons, bringing plenty of experience and speed to the table. He should be a frequent pass rusher in long-yardage situations, especially if the defensive line struggles to put pressure on the quarterback. The depth at linebacker is a question mark at the moment, but the Orange have senior Lewellyn Coker, junior college transfers Luke Arciniega and Josh Kirkland, and sophomore Oliver Vigile to compete for playing time. If there is an injury or two, Syracuse could have a problem, but if they can keep the trio of Spruill, Davis, and Lynch on the field, the Orange will be in great shape at linebacker.

The Orange will also return a lot of experience and a wealth of talent in the secondary. Syracuse returns its top three cornerbacks from last season: seniors Keon Lyn and Ri’Shard Anderson, and junior Brandon Reddish. Sophomore Julian Whigham also appears ready to be a regular part of the rotation at cornerback, giving Syracuse quality depth at that position. At the safety position, Syracuse is less experienced than last year with the loss Shamarko Thomas to the NFL, but it may be a more talented group. The lone senior of the group, Jerami Wilkes, brings experience, but he may be the least talented player in the group. Talented sophomores Durrell Eskridge and Wayne Morgan could end up getting the most playing time at safety, while junior Ritchy Desir and junior college transfer Darius Kelly could also push for significant playing time. With the Orange going four deep at cornerback and at least four deep at safety, Syracuse should be able to cycle fresh players in and out of its secondary all season with little drop off, and they should be able to matchup well with multiple receiver sets and excel in situations with extra defensive backs on the field.

As a whole, the Syracuse defense this season has a chance to be just as good, if not better, than any defense of the previous four years. If the Orange can find consistent and reliable pass rushers, this could turn into one of the best defenses Syracuse fans have seen in more than a decade. If not, there should be enough in the back-7 to make them respectable and at least put them in position to win games on a weekly basis.