Is Depth Going To Be A Problem For Syracuse? 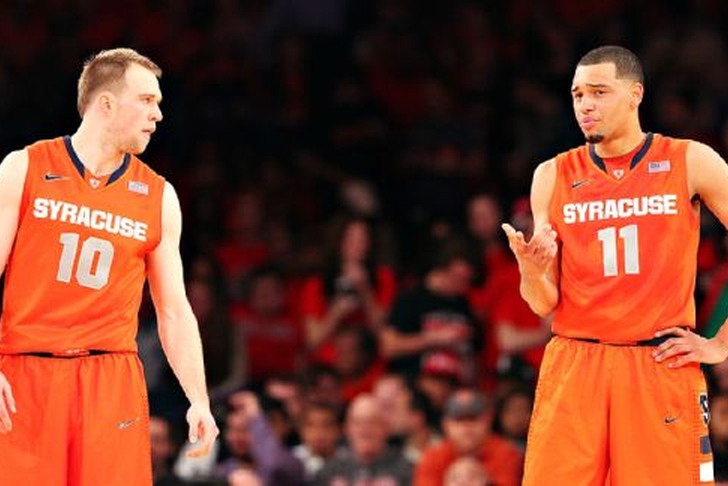 The flaws in this year’s Syracuse basketball team have been few and far between, but despite a perfect 19-0 record as we head towards the end of January, there have to be at least a few chinks in their armor. One potential flaw that’s worth exploring is depth, as Jim Boeheim is tightening his rotation even more than usual this season. While this has worked in the team’s favor thus far, it could prove to be a problem for them later in the season.

The season-ending injury to sophomore DaJuan Coleman may not seem like a big loss on the surface, but there have been noticeable changes since he left the lineup. Syracuse is now down to two centers, which means that position has 10 fouls to give each game, instead of 15. The absence of Coleman has also taken away the flexibility to put two big men on the floor at the same time, a lineup that Boeheim favors at the beginning of games.

Oddly enough, a lack of a third center has meant that forwards C.J. Fair and Jerami Grant are being relied upon to play all 40 minutes in just about every game. At times, both players have become noticeably fatigued during the 2nd half of games, and while it hasn’t cost the Orange, it has made it harder for Syracuse to pull away from weaker teams late in games. Boeheim has tried to get Tyler Roberson more playing time, but he doesn’t yet have enough faith in Roberson to play against quality opponents in tight games. As long as the outcome of a game is in doubt, Fair and Grant will stay on the floor, even if it means playing all 40 minutes. That’s fine for Fair, but Grant doesn’t have experience playing heavy minutes for an entire season the way Fair does, and he may not have the strength to keep up a pace like this for the entire season, especially if the season extends deep into March.

The Syracuse backcourt has a similar problem. For the most part, Michael Gbinije hasn’t given the Orange what they were expecting of him, which has forced Boeheim to give nearly all the minutes to starters Tyler Ennis and Trevor Cooney. The backcourt duo of Ennis and Cooney has shined this season, but in the long run they would benefit from a true three-guard rotation, instead of Ennis and Cooney playing a majority of the minutes with Gbinije getting sporadic playing time and riding the bench down the stretch in close games.

Syracuse has been able to get away with a short bench this season because most teams play a slow pace against them, which has allowed the Syracuse starters to play 40 minutes if necessary. But it’s a long season, and the Orange can’t always depend on other teams playing at a slow pace to help hide their lack of depth. At some point this season, they’re going to have to win an up tempo game that requires more than six players getting meaningful minutes.

Unless Gbinije, Roberson, Ron Patterson, or B.J. Johnson can emerge as a reliable contributor over the next month, the Orange will essentially have a six-man team, with two rotating centers and four players that rarely, if ever, leave the floor. Boeheim has had plenty of success in the past with teams that had little depth, but this Syracuse team has one of the shortest benches in recent memory, which could become an issue later in the season. With Saturday’s win over Miami, the Orange began a stretch of four games in 10 days, which should put the team’s lack of depth to the test and give us more insight as to whether this could become an issue later in the season.