How The Departure Of Tyler Ennis Affects Syracuse 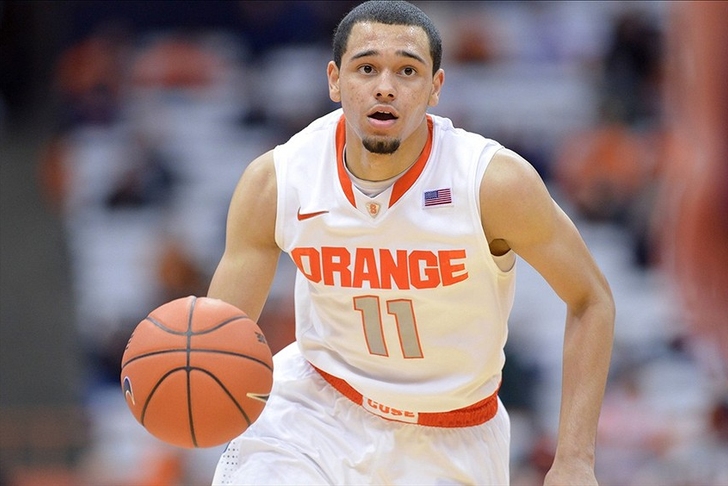 As many of us could have predicted, Syracuse point guard Tyler Ennis has decided to leave school and head to the NBA after an incredible freshman season. Ennis’ departure may be the most impactful of the four Orange players that have left school early in the last three seasons, as it could cause Syracuse to take a significant step backwards next season. Let’s take a look at how Ennis’ exit will impact some of his now former Syracuse teammates.

Jerami Grant – Grant’s not likely to say publicly whether Ennis leaving will sway him to stay or go, as he has his own decision to make about leaving early for the NBA. However, without a proven point guard to distribute the ball, could Grant be more inclined to take off as well? If he does decide to return for his junior year, Grant will be an even bigger focal point of the offense without Ennis around.

Michael Gbinije – Ennis leaving has a huge impact on Gbinije. Had Ennis stayed, Gbinije could have been released of his duties as the backup point guard knowing that incoming freshman Kaleb Joseph could assume those duties. However, Gbinije will most likely be the only backup point guard next season, and he may have to play more minutes there behind Joseph than he did this year behind Ennis. Gbinije would be far more effective in his comfort zone as a two-guard or a small forward, but it could be tough to get him significant minutes there if he’s also the backup point guard. If Grant leaves more minutes at the forward spots would also open up for Gbinije and others to take.

Trevor Cooney – Cooney’s minutes won’t be affected by Ennis leaving, but it could affect his play. A returning backcourt of Ennis and Cooney would have been relied on to lead the Syracuse offense and would have been one of the most formidable backcourts in the country heading into the season. But with teams certain to focus on Cooney, will Kaleb Joseph be adept at getting Cooney open shots? That’s going to be a tough task for an inexperienced point guard, and it could make it tougher for Cooney to score next year.

Ron Patterson – Unless Patterson proves he can be a viable backup point guard, Ennis leaving won’t impact him too much. However, if he can earn some significant playing time as Cooney's backup at shooting guard, it opens the door for Gbinije to play more at the forward spot when he’s not backing up Joseph at point guard.

Kaleb Joseph – Without a doubt, Ennis leaving affects Joseph the most. Instead of having a year to get his feet wet and play behind Ennis, Joseph will be thrown into the fire and be expected to be the starting point guard and play 30 plus minutes a night. The Orange hit the jackpot with Ennis, as far as having a freshman step on campus and play like a senior right away; that’s not going to happen again. It’s unfair to ask anybody to fill the huge shoes left by Ennis, much less a freshman, giving Joseph a near-impossible task next season.