Early Preview of Syracuse Football in 2014 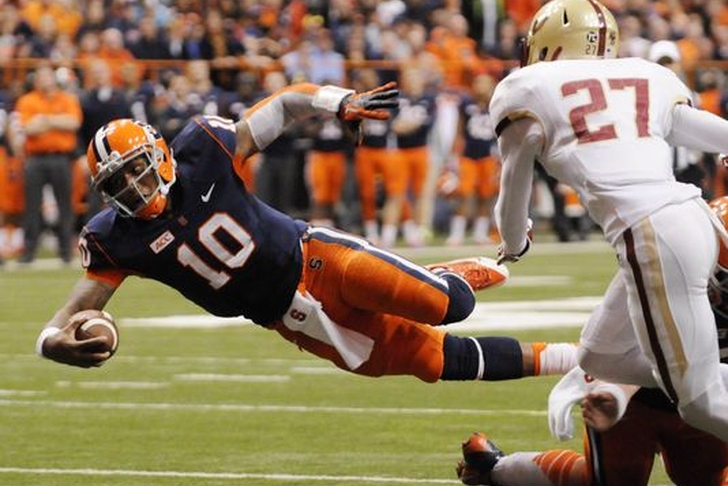 The Syracuse football team capped off a successful 2013 season in thrilling fashion Friday night, beating Minnesota in the Texas Bowl. The win gives the Orange its third bowl win and its third winning season in the last four years, giving Syracuse a healthy dose of momentum heading into 2014, and giving fans some fond thoughts and a positive outlook regarding the football as we start to give Jim Boeheim’s team our full attention.

But before we turn our complete focus to the 2014 basketball season and the Orange’s run at a second consecutive Final Four appearance, let’s take a sneak peak at what the Syracuse football team will look like in 2014, as they continue to take positive steps forward.

With the way Terrell Hunt finished the season, it’s going to be tough to unseat him as the starter. However, much like Doug Marrone, Scott Shafer has said all positions will be an open competition in the spring, so Hunt will not be guaranteed the starting spot next season, even though he’ll be the heavy favorite following his MVP performance in the Texas Bowl. Shafer often spoke highly of freshmen Mitch Kimble and Austin Wilson, and both will be given a chance to compete along with incoming freshmen Alin Edouard and A.J. Long. The wildcard of the group will be Central Florida transfer Troy Green, who will give Syracuse half a dozen candidates at quarterback. Of course, with Drew Allen and Charley Loeb both being out of eligibility, the backup spots are open, so even if Hunt holds onto the starting spot, there are a lot of empty spots on the depth chart for the young quarterbacks on the roster to fight over.

Jerome Smith is leaving for the NFL, but the Orange are in good hands, as they will retain a trio of talented running backs. Prince-Tyson Gulley was granted an extra year of eligibility and will bring a lot of experience and nearly 1,500 career rushing yards to the table. Sophomores Devante McFarlane and George Morris will complement Gulley. Both performed well in limited duty this season, and will be ready to be even more productive next season with regular playing time. If those three aren’t enough, the Orange will add true freshman Ervin Phillips to the fold, while Adonis Ameen-Moore may get a chance to get back in the mix, at least in short-yardage situations, as Smith took over many of the goal-line opportunities this season that Ameen-Moore got in 2012.

This perpetually disappointing group showed some signs of life late in the season. The offense was much better late in the season when Brisly Estime and Ashton Broyld were on the field at the same time, and both players should be key parts of the offense again next season. Alvin Cornelius and Quinta Funderburk made some important catches late in the season and may be ready to take on a more prominent role in 2014. Rising senior Jarrod West should also return, bring experience and leadership, while hoping to redeem himself after an uneven 2013 season. Adrian Flemming may also be granted another season of eligibility after earning a starting spot in preseason camp before being sidelined with an injury. That group alone sounds like it could be enough for Syracuse next season, but the Orange will add redshirt freshmen Corey Winfield and Sean Avant to the mix, while welcoming true freshmen K.J. Williams and Corey Cooper. Cooper may have contributed in 2013 had he qualified out of high school instead of attending prep school, while the four-star Williams could make an instant impact as well, helping to give Syracuse what could be a deep and fairly talented corps of wide receivers in 2014. If nothing else, Syracuse will have a lot of options at wide receiver, with the hope of finding at least four or five reliable options.

It shouldn’t be difficult to replace the 10 receptions Beckett Wales had this season, especially with the promise that Josh Parris and Kendall Moore showed, with Parris making the most important catch of the season. After redshirting this season, Tyler Provo and PJ Batten should compete for playing time behind Parris and Moore. This will be a young group next season, but there are some nice options, and George McDonald didn’t always utilize the tight end position in the offense this season, so a lack of experience shouldn’t be a big concern.

If Sean Hickey puts off the NFL and returns to school, the Orange will return four starters along the offensive line and may be able to put together a strong unit up front. The other three starters: Rob Trudo, Nick Robinson, and Ivan Foy, are all sophomores that got better as the year went along, which will put the offensive line in good shape heading into 2014. However, the loss of Mackey MacPherson will be huge, as he’s been one of the most important players in the program during the Marrone/Shafer turnaround. Jason Emerich will move into the starting spot at center, and while he doesn’t have MacPherson’s experience he should be fine, but depth at all positions could be an issue. Michael Lasker saw time at left tackle when Hickey was injured, but he’d obviously be a big step down, and Kyle Knapp could compete with Lasker for the starting job if Hickey leaves, but Syracuse will have to devote a lot of time during spring practice to developing some depth along the offensive line, as there was no one all that reliable behind the starting five in 2013.

It’ll be interesting to see what happens at the position in the offseason; with the graduation of Jay Bromley and Zian Jones, as well as the injury that John Raymon suffered during the season, the Orange will be thin at the interior positions of the defensive line next season. Eric Crume will have to help anchor the line, while Syracuse will need sophomore Marcus Coleman and junior Ryan Sloan to step up and play significant roles. The addition of junior college transfer Wayne Williams should help, as he is huge and will take up a lot of space, much like Raymon. However, the Orange may need some defensive ends to move inside, perhaps Isaiah Johnson or Trevon Trejo. At defensive end, the Orange still don’t have a pass rusher that stands out, but they’ll return starters Micah Robinson and Robert Welsh, as well as backups Johnson and Ron Thompson, which should make that group solid if unspectacular unless Johnson and Thompson can show significant improvement. Trejo, Donnie Simmons, and incoming freshman Chris Slayton will give Syracuse some depth and flexibility along the defensive line, which will enter next season with a fair amount of questions and a star to replace in Bromley.

Despite the loss of middle linebacker Marquis Spruill, this group is deep and loaded with seniors. Dyshawn Davis and Cam Lynch should retain their starting jobs on the outside, and could be among the top linebackers in the ACC. Luke Arciniega should slide into the starting middle linebacker position, while Josh Kirkland and Marquez Hodge will provide quality depth at the outside linebacker positions. Oliver Vigille is a player to watch, as he should find a spot on the depth chart and could push Arciniega for the starting job. Syracuse will also bring in a trio of talented freshmen linebackers in Zaire Franklin, Colton Moskal, and Parris Bennett, who may not get much of an opportunity in 2014 with all the depth the Orange have at linebacker, but they could be forced into duty in 2015 with four senior linebackers on the roster in 2014.

The Orange are optimistic that Julian Whigham will be able to return from the devastating injury he suffered against Florida State and play next season; if so, he’ll be penciled in as a starter opposite Brandon Reddish. Wayne Morgan should see regular time as the third corner, or as the starter if Whigham is unavailable, but beyond that, the Orange has little depth. Junior Jaston George should get a chance, but he’s only played special teams over the past two seasons; redshirt freshman Chauncey Scissum will get a chance to compete; and true freshmen Cordell Hudson and Lamar Dawson will also have a chance to make the depth chart, but outside of Reddish, Whigham, and Morgan, there is no experience and no guarantees for Syracuse at cornerback. This group did manage much of the 2013 season with Keon Lyn, who was arguably their best corner, but there are some questions about the quality of the group, as well as the depth, especially if Whigham is ruled out medically.

Despite the loss of Jeremi Wilkes, things are looking up at the safety with position, mainly because of the presence of Durrell Eskridge, who could be on of the top safeties in the ACC next season. Syracuse also returns Ritchy Desir and Darius Kelly at safety, two guys that saw a lot of the field this season and should be reliable options next year. Beyond that trio, there are some holes in the depth chart, although Morgan could play safety if necessary or if they manage to develop depth at cornerback. Syracuse may also be able to get contributions from a pair of incoming freshmen: Rodney Williams and Naesean Howard. Syracuse may not have the depth they’d like at safety, but with Eskridge they have a potential star, and they know they have solid options in Desir and Kelly, which should give them a reliable group of safeties next season, even if depth could be an issue.

The Orange will benefit greatly from the return of Ross Krautman. If he’s healthy, he could be one of the best kickers in the ACC, as he had one of the best seasons from a kicker in school history as a freshman in 2010 before his performance was hindered by a nagging injury the past few seasons. Syracuse also appears to have things settled at punter with the emergence of Riley Dixon. The Orange also have viable backups in Jonathan Fisher and Ryan Norton, which should make them solid in the kicking game in 2014. Syracuse also appears to have a promising kick and punt returner in Estime, while their coverage units in 2013 were some of the best they’ve had in several years, and that has a chance to continue in 2014.