5 Things That Must Happen For Syracuse To Beat Clemson 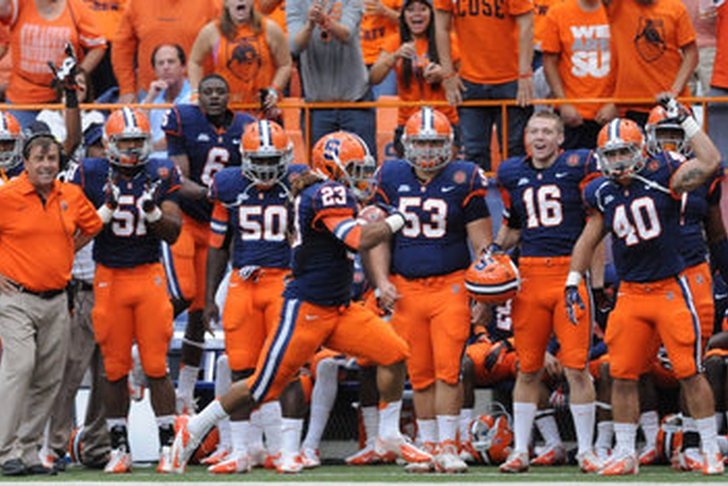 5 KEYS FOR SYRACUSE AGAINST CLEMSON

After a long wait, more than two years actually, the much-anticipated ACC opener for the Syracuse Orange is now less than a week away. Syracuse’s new conference has been kind enough to invite the third-ranked Clemson Tigers to the Carrier Dome to welcome the Orange to the ACC. It’s a game that most Orange fans have had penciled in as a loss since the schedule came out, and for good reason. The Tigers have a Heisman Trophy candidate at quarterback in Tajh Boyd, explosive offensive skill players, a talented and athletic defense, a head coach in Dabo Swinney whose star is on the rise, and a team that expects to contend for both an ACC and national championship this season.

However, considering the recent history of ranked teams visiting the Carrier Dome (Louisville in 2012 and West Virginia in 2011), as well as the way Syracuse has so easily blown out its last two opponents, albeit far weaker teams, it’d be foolish to write off the Orange as having no chance to win the game. No one’s saying it’s going to be easy, or anything more than a long shot, but it’s certainly possible. Syracuse will have to play well, and a lot of things will need to go their way in order to win, and here are five things that must happen for the Orange to beat Clemson:

1. Run the ball effectively – Even after all the fuss over who the starting quarterback would be, the identity of the Orange offense needs to be their ability to run the ball, and they need an effective and reliable ground game in order to be the Tigers. The pressure is more so on the offense line than on the running backs. Syracuse knows they have talented running backs, and if the openings are there, Jerome Smith and Prince-Tyson Gulley will find them, but the offensive line needs to get a push up front and open up some holes for the backs. If Syracuse can run the ball effectively, they’ll control the clock, keep the Clemson offense off the field, and keep the game as low scoring as possible, which will give them a chance.

2. Terrell Hunt playing mistake free – Hunt has handled himself well so far with regard to keeping his cool in the first few games of his career, but he’s got have nerves knowing that his counterpart in this game is Heisman contender Tajh Boyd. Hunt doesn’t have to outplay Boyd, he just has to do the things he’s been doing the past two games. He needs to stay poised, make smart throws, and make plays with his feet when necessary. Hunt doesn’t need to outplay Boyd for Syracuse to win, but he does need to play well, avoid critical mistakes, and not do anything that’s going to prevent his team from winning.

3. Keep Tajh Boyd in the pocket – Boyd is a dual threat, and Syracuse needs to do what it can to limit the threat Boyd presents running the ball. It goes against their defensive philosophy, but the Orange need to be wary about how they blitz Boyd, because if they don’t have back side containment Boyd can break free and do a lot of damage, just like Northwestern quarterback Cain Kolter did against Syracuse a few weeks ago. Syracuse will definitely blitz, and they need to put some pressure on Boyd, but if they don’t know him to the ground, they at least need to make sure they keep him in the pocket and limit the damage he does running the ball.

4. Win special teams – Syracuse won’t be quite as good as Clemson on offense and defense, so they’ll have to make a positive impact on special teams. Syracuse will need some kind of block or kick return to give them a boost at some point, but they’ll also have to be good on special teams throughout the game. They’ve been solid covering kicks all season, but their place kicker and punter need to be better. Ryan Norton needs to convert any field goal opportunity he gets, as the Orange can’t leave points on the field. Punter Riley Dixon also needs to have a good game and swing field position as best he can. Syracuse needs to have a lot of little victories on special teams that will end up making a significant difference by the end of the game.

5. Have a home-field advantage – Syracuse fans can’t ask for too much more than this; there’s a big-time nationally ranked opponent coming to the Carrier Dome, and the Orange have showcased a high-scoring offense that’s put 106 points on the scoreboard over the past two games. If there’s a big turn out in the Dome Saturday afternoon, the Orange need to take advantage of it, as so many past opponents have found out how difficult the Dome can be to play in when it gets noisy in there. If Syracuse can keep Clemson off the scoreboard early in the game, the crowd will get behind them, and the Dome will start to get loud, and that could give Syracuse the lift they’re going to need in order to take down a top-5 team.