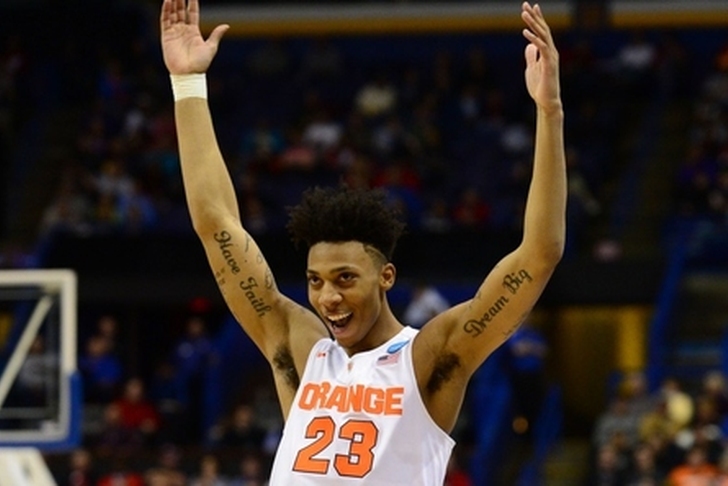 The Syracuse Orange were down 14 at halftime and as many 16. But, the No. 10 seeded Orange rallied in the second half to stun the No. 1 seeded Virginia Cavaliers in a 68-62 win. Syracuse becomes the first No. 10 seed to ever reach the Final Four.

The Orange closed the game on a 29-8 run in the final nine and half minutes or so. Syracuse went to a press that flustered the Cavaliers, resulting in several turnovers. The Orange had a six-point lead with two minutes to play. UVA missed an open three with nine seconds left to tie the game, and the Orange held on for the win.

Malachi Richardson went off in the second half, and finished 23 points and seven rebounds. Tyler Robinson had 10 points and eight rebounds, but fouled out with less roughly 2:30 to play in the second half. Michael Gbinije and Tyler Lydon had 11 points. Lydon also had five blocks.

London Perrantes had a team-high 18 points for UVA. Anthony Gill had 10 points, as did Mike Tobey. Malcolm Brogdon had 12 points, seven assists and seven rebounds, but was just 2 of 24 from the field.

Syracuse will get the winner of Notre Dame and North Carolina in the Final Four. They play later Sunday night.