10 Things We Learned About Syracuse In September 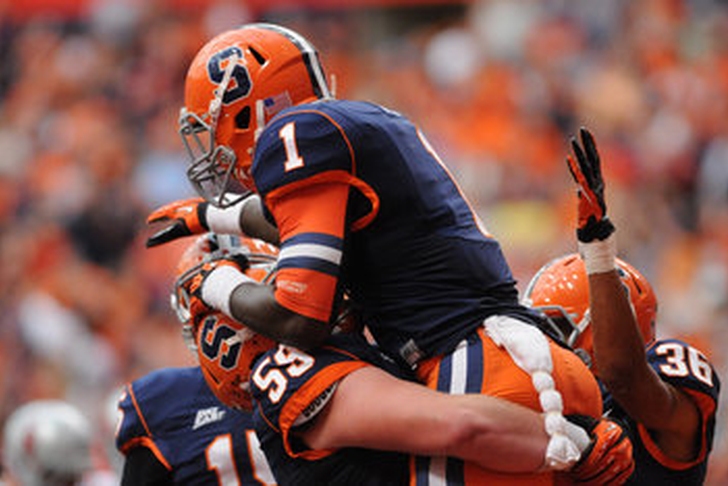 With its convincing win over Tulane on Saturday, Syracuse is finished with its September schedule, as well as its non-conference schedule. Even after four games, it’s tough to get a handle on the Orange and its new coaching staff, and we’ll certainly learn a lot more when ACC play starts in a couple weeks, but here are 10 things we learned about Syracuse during the month of September:

Terrell Hunt is the quarterback – It took a little longer than we all would have liked to figure out, but now it’s obvious that Hunt is Syracuse’s quarterback, and he has a chance to be a darn good one. Hunt has proven to be an accurate passer, a capable runner, and most importantly, a quarterback with poise far beyond his experience level. Hunt will face a lot tougher competition during conference play than what he’s faced in the past two games, but he appears ready to face that challenge.

The offensive line is a work in progress – They were able to push around Wagner and Tulane a little bit, but this unit is clearly not as strong as they were last season. Syracuse has the running backs to have a powerful ground game, but the offensive line still needs to prove it can get a push and create some holes against quality teams like the kind they’ll see in the ACC formidable. The right side of the line is particularly questionable and is still trying to find its form. One strength Syracuse does have up front is they are quick, so it’ll be interesting if Syracuse will run more sweeps and screens in conference play and try to pound it up the middle a little less.

Ashton Broyld is a major threat – Despite making just one catch against Tulane, Broyld is the team leader in receptions after four games. But being limited to one catch on Saturday didn’t happen by accident. Instead of allowing Broyld to catch a lot of uncontested bubble screens, the Green Wave covered him up with an extra defensive back, which took Broyld out of the game. However, that means either one less defender in the box or one less safety playing deep, both of which open up other opportunities for the Orange. Teams are going to look at Broyld as Syracuse’s top threat in the passing game, and he’s going to help the Syracuse offense immensely, whether he’s the one doing the damage or merely acting as a decoy.

There is no shortage of passing targets – The Orange don’t have one go-to guy in the passing game, but they do have a plethora of potential targets. In just four games, 17 different players have caught a pass for the Orange, and in any given game there are 10 to 12 backs, receivers, and tight ends that can contribute in the Syracuse passing game. It’d be nice to have a star receiver, but Syracuse does have a lot of guys that have the potential to be their leading receiver in any given week, and more importantly, they have a quarterback that goes through his progressions, can find the open man, and has no trouble spreading the ball around.

The offense will create some matchup problems – Syracuse may not have all-conference caliber wide receivers, but between their depth at the running back position and dynamic athletes at H-back in Broyld and Brisly Estime, Syracuse has some playmakers and can force opposing teams to make difficult decisions when defending them. The Orange are strong in the middle of the field, which can help open up space on the outside for its wide receivers, who need all the help they can get, but who are capable of making catches and moving the chains against one-on-one coverage. Being able to move Broyld around on the field and utilize their running backs in the receiving game will make them tough to defend, not to mention the mobility that Hunt brings to the table, as well as the tempo the offense has had since Hunt took over at quarterback.

Third downs is a strength on both sides of the ball – Scott Shafer tends to go on and on about succeeding on first down and that appears to be paying off for the Orange when it comes to third down. Offensively, Syracuse is converting 46% of its 3rd down opportunities, which is 15th best in the country. Defensively, their opponent have converted just 27% of 3rd down chances, including a good Penn State team that converted just one in 16 attempts. Syracuse being able to get the better of its opponents on third downs is going to go a long way in the ACC.

The four-man pass rush is a concern – We knew this was a concern heading into the season, and it’s still an issue. Syracuse has a healthy number of sacks, but their front four just does not get enough of a push on their own, forcing Syracuse to blitz even more than they have in the past. Isaiah Johnson and Ron Thompson are starting to play better, and Jay Bromley continues to perform at a high level, but there’s still little assurance that the Orange can bother a quarterback on a consistent basis using only its front four.

There are problems in the kicking game – Ross Krautman is done for the season, and Ryan Norton appears to be a bit of a downgrade, even compared to an injured Krautman who has struggled the past couple of seasons. Norton has already missed an extra point, which is unacceptable, and he also missed a field goal against Wagner. On the punting side of things, Riley Dixon has taken over the job from Jonathan Fisher, but his leg strength isn’t all that impressive, which means he won’t be able to swing field position significantly. The kicking game may seem like an ancillary concern compared to other things, but it can really make a big difference in close games, and it’s a weakness Syracuse will have to contend with this season.

Team confidence is high – Whether it’s from playing in the Carrier Dome, the insertion of Hunt at quarterback, or merely a bi-product of pounding two inferior teams, there’s no denying the Orange have an air of confidence about them coming out of the Tulane game. The defense has been aggressive and hard hitting, and part of that comes from having a lot of confidence. Offensively, things have been different since Hunt took over during the Wagner game. The receivers have played better, the running game has been better, and the offense is moving at a fast pace and putting a lot of points on the board, and right now they seem real confident heading into their highly anticipated showdown with Clemson.

Syracuse will be competitive in the ACC – No one’s saying that they’re going to win the ACC, but nothing has happened the first four weeks of the season that indicates Syracuse won’t be able to play close and competitive games against just about every ACC team on its schedule. Teams like N.C. State, Pittsburgh, Boston College, and Wake Forest aren’t exactly world-beaters, and they’re all teams Syracuse is plenty capable of beating. Even the conference opener against Clemson is a game the Orange have a chance to win, considering their past success at home against ranked teams and Clemson’s propensity for losing to unranked teams on the road while ranked in the top 10. Whether Syracuse can win at least four ACC games and become bowl eligible remains to be seen, but there’s no reason why we shouldn’t expected close and competitive games week after week the rest of the season.