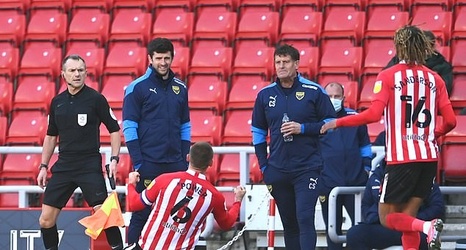 Oxford manager Karl Robinson alleged his goalkeeper Jack Stevens was headbutted during a half-time bust-up against Sunderland at the Stadium of Light.

Following the half-time brawl and after Max Power but Sunderland 3-1 up in injury time, the midfielder ran 50 yards to passionately celebrate in front of the Oxford dugout.

A hot-tempered afternoon on Wearside, when the Black Cats won to stay third in the hunt for a top-two place in Sky Bet League One, had incidents in the tunnel at the end of both halves.

Sunderland head coach Lee Johnson also hinted there were things he was not happy with concerning the visitors' camp, while Robinson suggested the police will be involved.